I discovered something interesting about Minuet last week.

She and I were on the couch in the library watching a movie – well, I was watching it, she was ruminating about important things – and I coughed. It was one of those abrupt coughs that catch you by surprise, so it comes out as more of a bark than a cough. Minuet immediately looked up. I had not moved much, not enough to jiggle the couch and alarm her with sudden action; it was entirely the sound.

Then, later, a character in the film dropped a coffee cup which smashed on the floor. Min reacted to that sound, too. It was a light, tinkling sound, but the frequency of it must have penetrated my very-oldster’s silent world and alerted her to something.

Minuet is unquestionably deaf. I can move litter-boxes, sweep and even vacuum a couple of feet away from her, and she won’t realise it. And yet, now and then, some sound, due to its harshness, or pitch, will filter through what very little remains of her hearing.

I wonder what she thinks of these noises, if anything. Out of a great screen of blankness, sound comes to her, very rarely and without warning. Does the very fact that she hears it startle her, or is she pleased that she can perceive it? Does it matter to her at all?

In any case, I communicate with her through touch and gestures, sight and smell. We have come to understand each other in a number of ways, and that is what matters. She is deaf and, if I were deaf, I would still feel her purr, and that happens all the time. 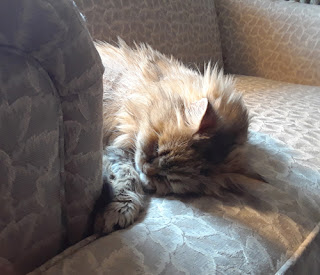