Minuet is not the only cat in the Cosy Apartment whose attitude toward me is changing. Hector has been here since last September and, though he became friendly quite quickly, and we have been pals since not long after that, his behaviour is still evolving. Last week, he climbed up on my lap for the first time. 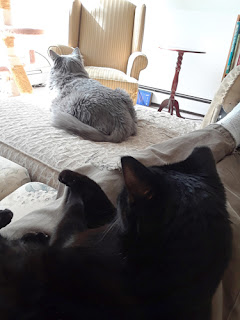 I had placed him on my lap previously; he was at ease there, and stayed for quite a while. But last week represents the first time he voluntarily jumped up. Since then, he has done it four or five times, remaining for as long as forty-five minutes. He also likes lying right against me, as he does on the bed at night. 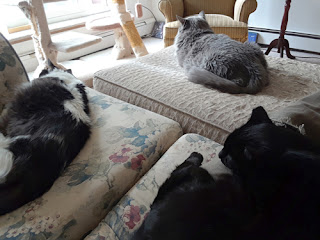 Whether this will continue I cannot say, but I think, with the right human, it’s something that the dark knight will take to a new home, when he is adopted. It may take a while, but, just as other cats I’ve fostered accelerated their growth of trust and comfort when they went to their permanent homes, I believe the same will occur with Hector, and it will take less than nine months for him to find a new lap.

Until then, however, he is welcome on mine. 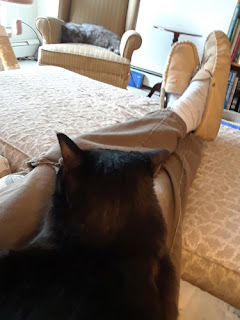