Once again, it seems, Josie isn’t getting much coverage in my blog. She’s too unassuming, too diffident for her own good. It’s not that the Great White doesn’t cause her share of trouble. She will take every opportunity to get at Tungsten’s food bowl, which contains tastier, though not better, hard-food than her own. She will sometimes swat at Kola - though at least once recently, I have seen the Floof King actually chase Josie up the stairs from the basement, so maybe that relationship is evening out. But by and large, she doesn’t do much to get herself noticed - at least while I have my camera handy.

Though here she is doing what I like to call the ‘eye/ball’. 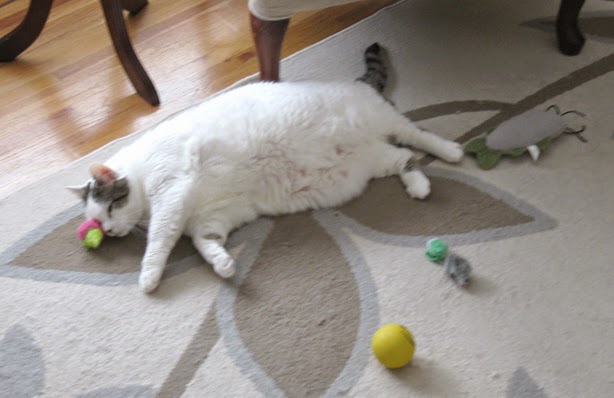 But the real reason for my Chubs’s appearance today is to announce that she has lost weight. Josie is half a pound lighter now than she was six months ago. She is still hefty (7.04 kilograms) but not as  weighty as she was in June (7.25 kilograms). I attribute this leavening to the soft-food I feed her. It is Merrick brand and, unlike most good food, my beasts seem to enjoy it, and have for some time. Josie in particular looks forward to soft-food meal-times. I buy five flavours regularly, the five that are popular in my house, so that variety is maintained. Josie will eat all five, and a good-sized portion at each serving. Now that I think of it, I have not seen her at the hard-food bowls as often as was the case. I would like to reduce the amount of hard-food served still further, but the reasons I can go only so far in that direction need another story. For now, I don’t want to detract from the Great White’s achievement.

Who knows? In time, I may have to stop calling Josie my Chubs...
Posted by John Bellen at 8:39 AM