A month ago, I published pictures of Renn and Tucker eating almost together from the hard-food bowls, an unusual event. A week ago, I was able to record this occurrence, even more unusual. The cats’ dinner is usually about three-thirty on my days off, and an hour later when I work; their snack-time is approximately three hours subsequent, and the hard-food bowls are made available once more about nine or nine-thirty at night. That means the beasts receive only a ration of soft-food (though it is as much as they want) in five or six hours. This plan to encourage more soft-food consumption is working; the cats are ravenous come snack-time, and there is a happy and somewhat disgusting sound of six animals eating when I put down the stinky goodness on the floor. (Well, it’s in dishes, which go on the floor; the beasts themselves often toss it about the linoleum.) Nonetheless, they are hungry when the hard-food is presented once more.

How hungry? Enough for Josie and Cammie to eat this close. Cammie dislikes Josie. I believe this stems from a fight many months ago which may have pitted my Chubs against the Siamese Princess. Despite her lean and athletic form, and her claws which grow too sharp too fast, Cammie was easily worsted. The damage was not serious, and has not been repeated, thankfully. But the animosity on the victim’s side has lasted. Josie dislikes Cammie, too, I am afraid, though not to the extent felt by the other for her. They trade non-connecting blows from time to time, and Josie passes much too close now and then to Cammie for the latter’s comfort.

And yet, hunger can make cats do astonishing things. The images you see below are like a lion and a gazelle coming to drink from the same water-hole at dusk; a truce forms spontaneously, as they realise that they both need water to survive. Here, however, you have two lionesses: the older, heftier veteran, already a champion of one battle, and the leaner, younger comparative newcomer, wary and watchful, who puts on a fearsome show, but is really not a fighter.

Night falls in the jungle, and the scenes of would-be battle are covered with the sounds of eating. But notice how they keep an eye on each other, even as they chew… 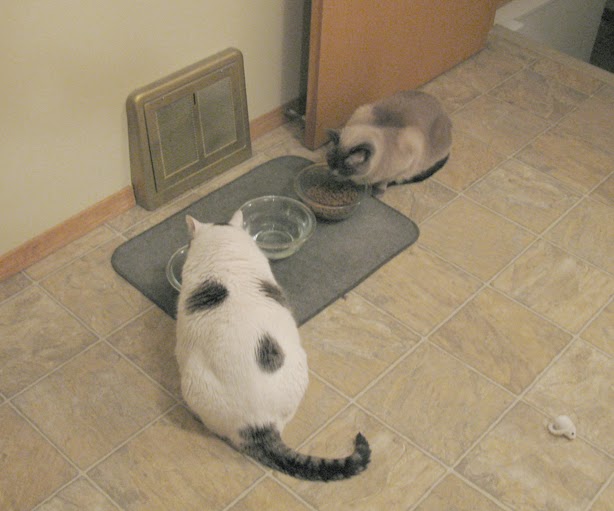 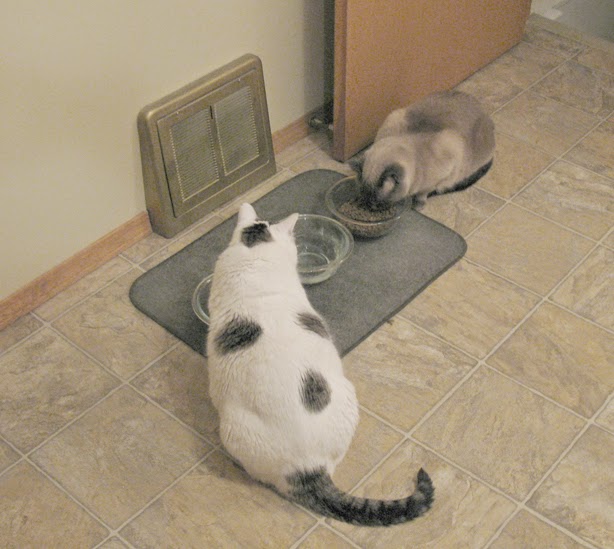