I try to keep an eye on my cats’ habits, so I will know as early as possible when something is amiss. One of the traits of which I am particularly watchful is their trips to the litter-boxes in the basement.

Early in October, Renn appeared to be having trouble urinating. An overnight stay in hospital did not result in much but a diminution of my bank account, though I think that the doctor’s suspicion of a mild inflammation, pressing on Renn’s bladder, caused my big boy to think he had to go when he did not really need to. That has long since cleared up and all my cats appear in good health right now.

But they cause me worries nonetheless. Soon after I took Renn to the veterinary, I noticed that he was spending an inordinate amount of time downstairs. That usually means time spent at the litter-boxes - unless it is Tungsten trapped by Cammie, ready to ambush the orange one on her way up the stairs. So I waited until my big boy thumped down the staircase once more and did not return after a few minutes, and then followed him down.

He was at the litter-boxes, to be sure, but he was not interested in using them, except as a means of getting to the back of the space under the stairs where they are kept. As you may know if you’ve read my blog for a while, Renn is my scientist, a scholar of all things. He had evidently seen something that aroused his curiosity: a spider, perhaps, or a centipede. It had likely come out of or gone under the drywall there. All Renn would need is to see the object once, and he would return repeatedly to stare at the spot where he had last observed it.

Renn caused me some anxiety in this matter, and, though many of the alarms I experience in regard to these beasts are false, they are better than real ones. In watching out for the cats we care for, we have to be as observant as my big boy himself. 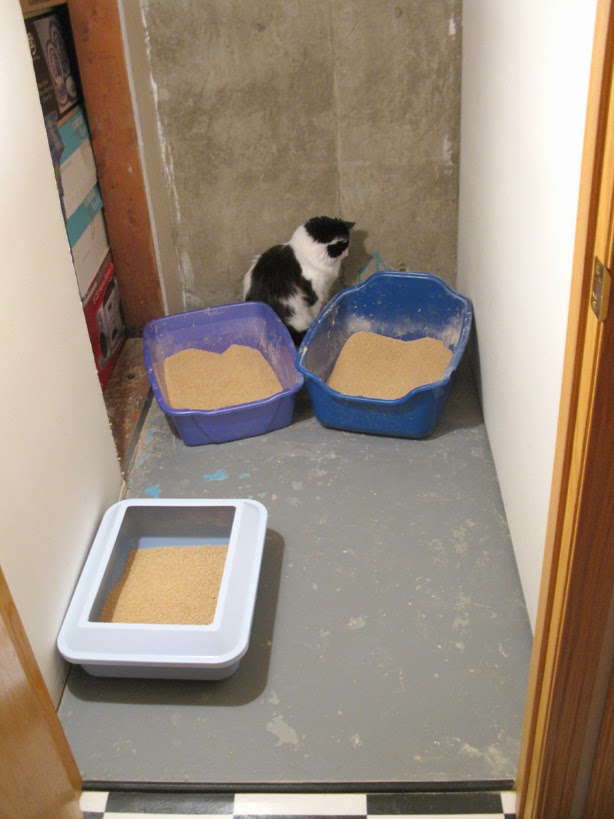