Most cats like warmth, which I find strange, considering that their body temperature is on average higher than ours and they are covered in fur, sometimes thick fur. Yet they enjoy lying in the sun on a hot summer’s day (which doesn’t preclude them later trying to find shade or a spot of cool floor on which to relax) and they like heating pads.

I have two beds in which heating pads have been inserted, and, in the parlour, several folded towels under which a third pad has been placed, for the comfort of my foster-cat, Kola, who spends much of his time in the parlour. But Cammie, who has not discovered or for some reason dislikes the heated beds in the sitting room, has found the heated towels to her liking.

Every week, before movie-night on Saturdays, I vacuum the couch in the parlour. I take the heated towels off, and set them aside. This last weekend, Cammie came in while I was cleaning and, evidently seeking a little warmth on a chilly night, looked for the heated towels. I had placed them on a round side-table. The fact that they were not in their usual spot did not deter the Siamese Princess. She knows nothing of electricity; to her, the towels are warm because they are the towels - wherever they may be. 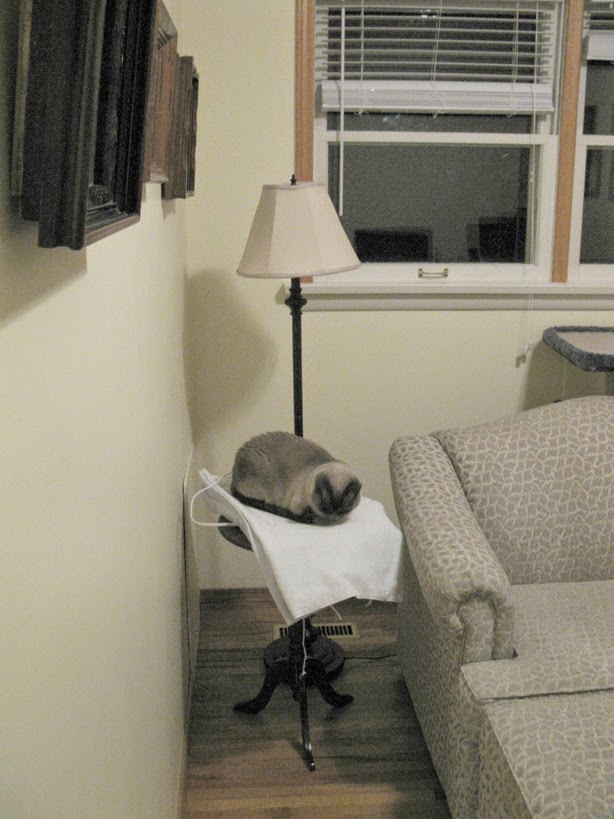 The towels were displaced only briefly, and soon, Cammie was back on the towels, which were back on the couch. This simply goes to show that when a cat wants something, she will find it, wherever.
Posted by John Bellen at 6:22 AM