Having pets, one is always wary of their health. This weekend, Josie gave me cause to worry. Saturday, she didn’t eat anything. My Chubs’s appetite is less than it was, and she is choosier regarding the flavours she consumes. But I can usually count on her to show at least an initial interest. She may then turn away after sniffing something, if it is not a variety to her liking.

Saturday morning, I woke to find several cats on the bed, helping me sleep in. Josie was one of them, which is not unusual. What was unusual was that she remained on the bed even after she knew that I was preparing the beasts’ soft-food breakfast. I brought her a dish of what was on the menu, but she was less than enthusiastic about it. She didn’t even smell it, which is a bad sign. I returned a few minutes later with some Fancy Feast ocean whitefish, which the Great White always enjoys - but not on this occasion. I knew something was amiss. 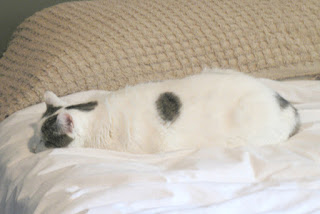 I generally do nothing in such cases at first. I wait and see if the cat comes around. Dinner brought the same story, as did snack-time four hours later. Josie spent the whole day lying in the same spot on the bed. I was concerned now. I didn’t want her to go for long without eating. Her weight notwithstanding, a cat cannot starve for more than a few days without incurring damage to her internal organs. We were a ways away from that time, but nonetheless, I was thinking of having to force-feed Josie, which I had never done. I would see what Sunday brought.

Fortunately, whatever my Chubs suffered on Saturday had passed by the next dawn. She had a good appetite on Sunday and consumed her normal amount of soft-food for breakfast. I watched with relief as she then waddled over to the hard-food bowl and ate there, too. I didn’t mind. Josie was back to her old self. 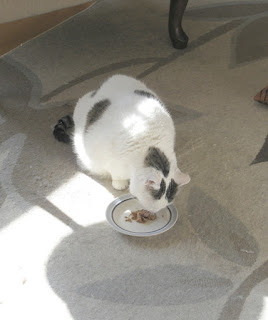 I suspect this was a matter of an upset stomach, perhaps a headache, or whatever minor ailment puts a cat off her food. Humans have such days; I’m sure cats do, as well. Even so, the moment one of mine acts unusually - too many trips to the litter-boxes, sitting down oddly, refusing to eat - I start worrying, and thinking of possible causes. I know this is better than ignoring what may be symptoms of something dangerous, but it can be exhausting. I went to bed Sunday night relieved but tired. And Josie lie down beside me, her stomach full. Thank goodness.
Posted by John Bellen at 12:42 PM