Time's Fun When You're Having Flies

Play-time at my house has been stale. I have fuzzy mice, plastic rings off milk jugs and Kick-a-roos; a laser-pointer and an old Neko Fly string-toy for group activities. Each evening, I like to spend some time playing with the beasts, but they have been apathetic about it, to tell the truth. I think it was the principal group-toy: the Neko Fly we had been given as a Christmas gift had been a furry, simulated mouse. It has been reduced to a strip of fuzzy leather, and only Noah has summoned any enthusiasm for it. It was time for new toys.

The town in which I live did not have any Neko Flies for sale, so I ordered three new toys on-line. They came within a day; I don’t know why I didn’t order them sooner. I bought a fake fox-fur creature, a fake dragonfly and a fake tarantula (though this toy has but six fake legs; that’s unimportant, as I suspect most of the legs will be pulled off soon anyway.) I brought out the dragonfly last night.

What a difference! Tucker couldn’t get enough of the new item. He chased it here and chased it there, leaping over the nylon tunnel repeatedly to get at it. (I made him do that; he can use the exercise.) The roly poly barged into other cats’ attempts to play and seemed intent on biting the dragonfly. 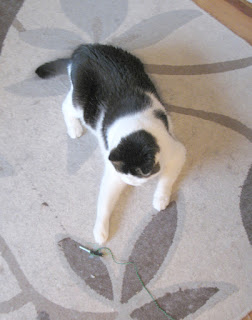 Renn enjoyed it, too. He jumped to catch it - his muscular legs can throw his lean body quite a ways up; I’m always afraid that he will hurt himself coming down again. He rolled on the floor trying to catch the dragonfly and - my favourite trick of his - he plunged into the nylon tunnel when he saw that his quarry was hiding in there. 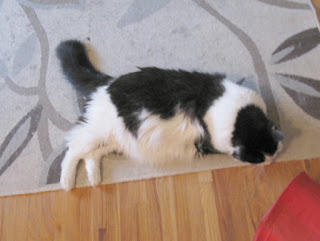 Even Josie was active, hurrying after the dragonfly - as much as she can hurry - and stretching for it on the sitting room rug. We transferred some of her play-time to the bedroom, where she wrestled with the toy on the bed. 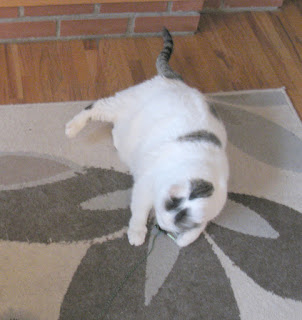 Only Cammie didn’t join us. This had nothing to do with the toy; the princess was in one of her moods. She was feeling better later on, when she came and sat on my lap and purred for ten minutes or so, but there was no playing. I will try her tonight. 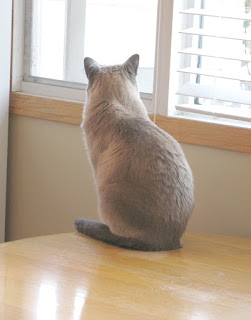 You may have noticed an absence of Noah during this play-time. That’s because he is such an active boy - and the others still dislike him - that I must play with him separately from the others. But don’t worry; he gets his own time with me before he goes to bed each night. We play in the library downstairs, and it was too late and too dim for a proper picture of him running about, so I have to settle for one of the boy eating. But he did enjoy the new toy. He liked it more than the old, and raced after it constantly. He cannot get decent traction on the linoleum floor of the library, so he skids about, his feet flailing as he continually tries to turn circles after the elusive dragonfly. But catch it he did now and then, and did not want to let go of it. He ran so much, though, that he was panting and after fifteen minutes' exercise was starting to slow down. But he remained game until bed-time. 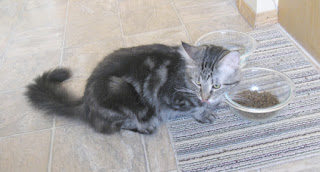 So play-time has been rejuvenated a bit. I will try the other string-toys when the dragonfly’s novelty palls. The old toy has been honourably retired but is being kept in reserve. Noah noticed it and likes it enough to knock down a box to get at it. It started a good tradition, with its flies and bugs and fur on a string. After all, to a cat, time’s fun when he’s having flies.
Posted by John Bellen at 9:52 AM