Courteous in Her Displeasure

There was something positive about the visit to the veterinary on Monday. It was actually a double-date. Cammie went with Tucker and me. She is still very reluctant to have me cut her claws. I was able to get two of them, but thereafter, she was on to me, and was very resistant. So, off to the veterinary hospital she went, too.

The princess was attended to by a technician (her 'lady-in-waiting') while the doctor saw Tucker. I stayed with the roly poly. I was worried about Cammie being away from me during her little procedure, but when she was returned, the technician informed me that there had been no problem. It was stated that Cammie “didn’t like it, but was very nice about not liking it.” That’s my girl.

She is such a surprising little creature. When it was initially time to go into the carrier for the trip, she was, of course, wise to what was about to happen. She made a dash for the high ground (ie. the taller cat-tree in the sitting room) from which I would have been able to pry her only with great difficulty. So I grabbed her as she was half-way up. She screamed her anger all the way to the carrier, yet she did not struggle. She was going to have her sharks’-teeth claws cut and could have disembowelled me with them, but probably didn’t even think of using them, never mind actually do it. Once in the carrier, Cammie cried now and then, but otherwise was wonderfully co-operative.

When she returned home, she had a good soft-food dinner and relaxed on the bedroom cat-tree by the window, watching the sunset’s glow. She was forgiving in her attitude toward me.

Considering all that she has gone through, and what she could do, Cammie's forbearance is remarkable. I know I’ve written about this behaviour before, but she gave me a bit of good news in an otherwise discouraging day, and she deserves credit for it. Thank you, my princess. 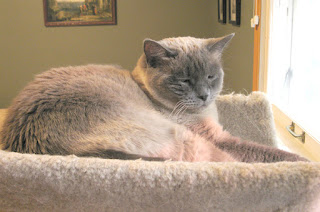