The Aftermath of Discovery

I would like to thank all of those who commented on Tucker’s new situation and who offered advice. I will be doing research about feline diabetes, and talking to the doctor about it. In fact, Tucker and I will be having a consultation with the veterinarian late on Wednesday, September 2nd. I imagine I will be doing more speaking than Tucker, who will come along principally as a target for my first practice shots with a needle. As Brian, from Brian’s Home, pointed out, I have given sub-cutaneous fluids using a needle; if I can do that, insulin with a needle will not be much more difficult. Certainly Tucker will offer a more substantial victim for my poking than little Tungsten did.

There is much that I want to inquire of the doctor, and I am making notes. The rescue-group to which I belong is also giving advice and help, which will prove valuable. In the meantime, the roly poly’s dental surgery, necessary for the cleaning that he very much needs, has been postponed. The doctor believes that Tucker is, except for the diabetes, healthy, and able to withstand an operation of that sort, but to be safe, the procedure will occur only after Tucker’s insulin amount is arranged and stabilised. The doctor told me that this could take a few months, but averages, in her experience, about four or five weeks.

I am most grateful for all of the assistance I am receiving in this matter. Tucker would be as well, if he could comprehend what is happening. Instead, he will thank everyone by scaring the crap out of them through pretending to be dead in this picture. His demise is very life-like, don’t you think? 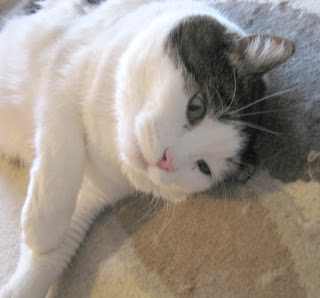