Of Frying Pans and Fires

After my worries over the weekend with Josie, it was Tucker’s turn.

Yesterday, I took him to the veterinary hospital. He has had terrible breath for a while, and his gums appeared red to me. I was concerned that he might have a severe case of gingivitis. My fears were justified, unfortunately, and he will need a dental operation to clean them. At first glance, the doctor did not believe that any teeth will need to be extracted, though that opinion may change upon closer examination. The cost will be more than $500; $700, if teeth need to be removed. Tucker remains my most expensive cat. 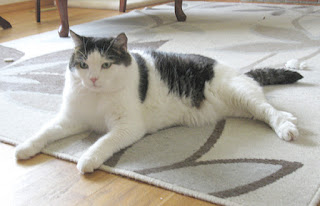 That was not the worst news, however. The roly poly one has been wetting where he shouldn’t. This I attribute to stress over Noah’s presence. But Tucker has also been dripping urine here and there, usually after he uses the litter-boxes; he does use them, he simply goes elsewhere, too. (Such as on my duvet, when I was trying to put him in the carrier to go to the doctor - but that was fear, the poor fellow.) So, considering his history with urinary tracts, I asked the doctor to run a urinalysis on him, as well.

Despite wetting immediately before being put in the carrier, and even in the carrier, there was enough urine left in Tucker’s bladder to test, and the technicians began it before we left the hospital. As I was paying the bill, the veterinary came out and told me that my cat’s glucose levels looked very high, so poor Tucker had to be shaken out of the carrier again for a quick blood test. The normal numbers for glucose are three to six (three to six what, I don’t know); Tucker’s was 23.5. Tucker is diabetic.

I will be talking to the doctor at length next week about all that this entails. Tucker will need insulin for the rest of his life, of course, but we will have to determine the right dosage, which will probably mean a few rough weeks for the roly poly one. I will have to get used to sticking him with needles. I was growing accustomed to giving Tungsten sub-cutaneous fluids, so I suppose I can do this for Tucker. I must. He will depend on me even more than in the past.

I don’t know how much this will cost; it will depend on the dosage he ultimately receives. But I hope that between the treatment for the diabetes he has developed, and the dental work, he will feel much better than he must be feeling now. That sausage of a cat has been through much, and will have to go through more. But better health lies in his future, I hope, and we will be working toward that. 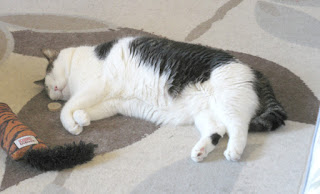