My cats keep me guessing. I understand them well, I think, but there is much that is hidden from me yet. Sometimes what is concealed is rather esoteric; often, it is mundane, but still puzzling.

Tucker is a very sensitive animal, even for a cat, as I may have mentioned before. Periodically, when under stress, he relieves both this stress and himself outside the litter-boxes. This he does usually on the floor in the basement which, since I replaced the carpet down there with linoleum, is not such a big problem. Even so, I dislike having to clean it up and, more than that, I dislike him being under stress, and puddles on the library floor are signs of this. 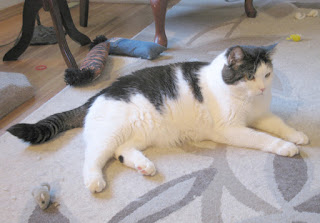 Noah’s advent led to some instances of wayward wetting. They have grown fewer and farther between, though Tucker still does it from time to time. (The irony is that the roly poly is the one who bosses the new boy, not the other way around. Evidently, Tucker finds staying on top an emotional struggle.)

Last evening, Tucker ambled down to the basement, where the litter-boxes are kept. I thought little of it, except that he was down there an inordinate amount of time. I worry when my cats do that, as both Tucker and Renn did that when they were having urinary tract issues. (Tucker’s necessitated major surgery; Renn’s vanished without a trace.) So eventually I descended myself, to find Tucker hiding behind a chair. He does this when he thinks he’s in trouble. He is not adept at hiding, due to his size, but it gives me an indication of his emotions.

I naturally thought that he had wet where he shouldn’t have. When he does it, he is always embarrassed by it, certainly regretful. He knows he shouldn’t do it, but it’s a compulsion, so I can hardly punish him for it. Anyway, I searched, but could find nothing untoward. I made sure that the roly poly one did not feel that he was in trouble, and we climbed the stairs together. 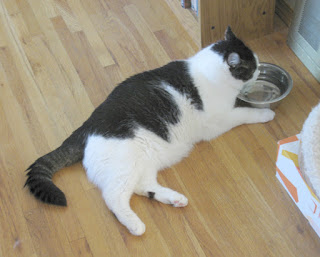 Later, the scene repeated itself. I found my sausage of a cat at the bottom of the staircase as I was coming down. He looked guilty, but then he often does. It’s that big moon-face of his and the wide eyes. But again, I could see no evidence of wrong-doing, or even of bad aim. (He is, in fact, not only my most regular of cats in terms of bodily functions, but my most accurate.) I explained to Tucker that he was not in trouble; he purred, I puzzled.

Come ten o’clock, and I was putting Noah to bed. We played a bit, then I carried him to his bedroom (the downstairs shower-room) and bade him a good-night. As I was about to go upstairs, I saw a centipede scurry across the chequered linoleum floor. This provided a clue to the mystery. If Tucker had seen this multi-legged little fellow - and he could have, even in the dark basement - he would have been mesmerized by him for some time. He would not, as other cats may have, killed the creature. He is too timid for that; he instead would have watched it. He would have lost track of time until his human came down to investigate.

This may not be the solution to the problem. But Tucker was not doing what he ought not, and that was to my satisfaction. If he wants to be astonished by nature, that’s up to him, though I can’t see him studying it like Renn. I picture him watching, his eyes bigger than normal, his mouth open, his fuzzy face agog. After all, if I’m kept bewildered by my cats, they should be bewildered by something in their turn. 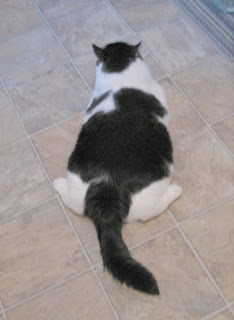 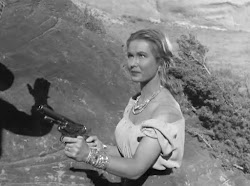