Each cat has its own unique personality, as any cat-owner knows. How different cats behave toward the same situation is interesting, and often amusing.

Josie is a good example. She is now my oldest cat, at twelve years of age, and the one I have had the longest, now that my Tungsten is gone. Josie is not a fighter. She did get into a very short brawl with Cammie once, but that was unprecedented. No, my Chubs is not a violent animal. This may be seen in regard to Noah.

Noah is my foster-cat. He is not yet a year old and is full of energy. He can be mischievous, and he sometimes likes provoking the perma-cats. This has, I think, something to do with the disparity in their ages. The youngest of my adopted beasts is Renn, and he is now eight. Tucker is ten, as is Cammie. These must seem like a bunch of stodgy old fogeys to someone like Noah. So he charges at them through the nylon tunnel, he jumps on them, he runs at them. Only Tucker does he leave alone because, surprisingly, the roly poly one takes the initiative and gives Noah a pummelling now and then.

When Noah comes too close to Renn, my big boy lets out a long, sustained groan, hardly a growl, but full of dissatisfaction and unmanifested menace. When the youth approaches Cammie, the princess lays back her ears, narrows her eyes and roars like a panther about to pounce. When Josie is upset with Noah, she gives a high-pitched, whiney growl that sounds a crotchety old woman complaining about neighbours.

No, the Great White does not convey ferocity in any convincing terms. When Cammie’s ire is aroused, I can hear it from one end of the house to the other. When Josie is angry, everything else must be quiet and still, or it goes unnoticed. I feel sorry for my Chubs; she is probably being as violent in her protests as possible, and no one is taking her seriously.

This is why I am glad she is an indoor cat in a safe environment - Noah’s depredations notwithstanding. She would not do well in the wide world, on her own. Her defences would be disregarded like a tidal wave ignores an umbrella, and her feeble anger brushed aside as if it didn’t exist. I take her protests into account when she makes them, though, for no one likes to be insignificant, and in all other things, the Great White looms large.

Josie is my pacifist, my not-so-little old lady, my beast with the wobbly belly, and it does me good to see her taking her ease in the sun. 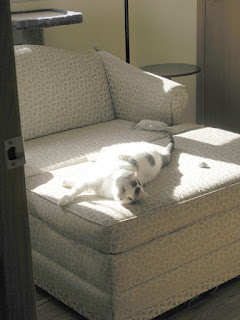 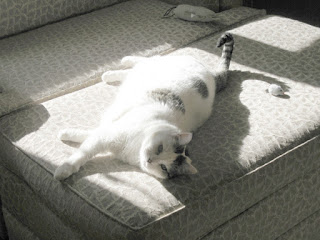