A Brush with Something Different

I’d like to thank everyone for their thoughts and best wishes regarding Cammie during last week’s bout of ill health. She is eating (more on that below). She is, however, sick again. This time, she has caught a bit of a cold. This is less serious, I think, than what she had; it is probably making her feel miserable but is very likely not dangerous. She has a snotty nose and is sneezing, but she is hungry and she is keeping her food down.

She has, in fact, decided that she likes another kind of food. She loves her Fancy Feast, despite my continued attempts to have her try something else. For years, she has favoured the ‘ocean whitefish and tuna’ variety. She has, in the past week, wanted little of it. I had, however, opened a tin of ‘seafood feast’, which Renn likes for the time being. I gave some to the princess, and she gulped it right down. The ingredients are sketchy: ‘ocean fish’ is the first in the list. I believe that may cover about four hundred thousand different species of marine life. Anyway, she is eating it, and it is giving her a bit of variety. 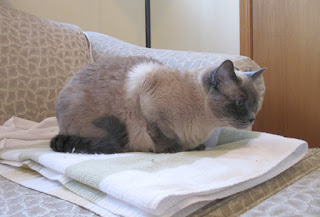 Cammie has done something else new. Last night, she allowed me to brush her. Previously, she had hissed at the very smell of the brush. Perhaps now, with a clogged nose, she can’t sniff the scent of other cats on the implement. The other three perma-cats loved their long brushing session yesterday, so I thought I’d attempt it with Cammie. Lo, she permitted about a minute and a half of brushing. As her cold subsides and her sense of smell returns, she may hiss again at the brush, but I will push my luck in that regard until she does.

The third interesting thing about the princess is her reaction to a new house-viewing. Once again, she had to go to the spare room, along with her roommates. She had ensconced herself in the downstairs cylinder cat-tree. Instead of prying her out of there, I simply pushed the cat-tree into the spare room; Cammie remained in it. Once in the spare room, though, I opened the door of her cage, and down she climbed; she walked into the cage without a fuss.

Are these deviations of character due to a foggy head induced by her cold? Are they permanent? I don’t know the answers, but I do know that Cammie keeps things interesting around the household. 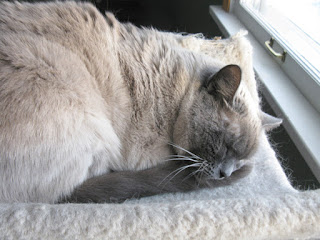