Josie at Square One

Josie’s visit to the veterinary hospital was inconclusive (read: waste of money). A sample was taken of the lump and, though it showed nothing harmful, the doctor informed me that it may simply have been that not enough material was gathered in the procedure. I could take my Chubs back for a second sampling, but that may yield just as little.

She does need a dental. Her mouth is not as bad as Tucker’s, which has been left untreated because of his diabetes, but it needs work, too. So, once I and the beasts are established in the new residence, I will make an appointment to have Josie’s teeth and gums seen to and, simultaneously, have the lump removed. I will have it sent away for analysis; that will cost extra, but I will save something in having two surgeries performed at one time. This is the theory. But I want to know if the nodule has been produced by anything sinister.

Josie does not seem to be in any discomfort. She is eating well, purring a great deal and enjoying her spots at the window and in a heated cat-bed. She also has her spot very close to my head at night, on the bed. She likes to occupy the location whether I am facing her or not. With my Chubs pinning the bedclothes down on one side, and Renn on the other, it makes for a tight fit. But I’d rather have the beasts with me than anywhere else. 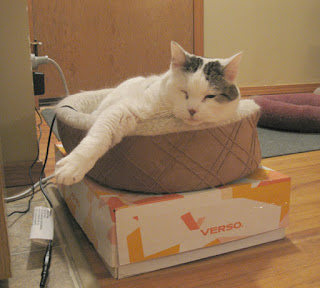