Looking Forward to a Moving Experience

Moving is an inconvenience on many levels. Having to find enough boxes to contain all the belongings you have somehow accumulated; finding a moving company; having to live ad hoc for weeks while coping with an ever-changing topography due to heavy boxes and furniture in different places each day, and having to be ready for the actual day of transport.

However, the end is in sight. My planned day of moving is December 30th. The movers will arrive between nine and nine-thirty that morning and, hopefully, have most of my belongings carted over to the apartment by mid-afternoon. The estimate is for three to five hours. That’s not a good estimate but it gives me the worst - or, rather, the most expensive - scenario. I will be moving some of my property in a rented van tomorrow, and probably after the move, as well. That will save on some moving time and, consequently, money. I am taking the day off on the 30th, so as to be on top of the move. Or as much as I can be.

I must say that I am looking forward to getting into the new home. Now that everything is topsy turvy with moving and packing and sorting and sifting, I want it to end and for all to be back to normal. There will be a slightly different normal because of the new residence, but, by the new year, the process will have begun.

I am, as I did five years ago, using the change of location to shed some items that are unwanted or unneeded. That never results in enough being let go, I find, as there is always some excuse - and discouragingly often, a good excuse - to retain an item. But I have less space in which to store or display belongings this time, so things must go.

In any case, there are four items that I will definitely be taking to the new apartment with me, as it would simply not seem like a home without them. 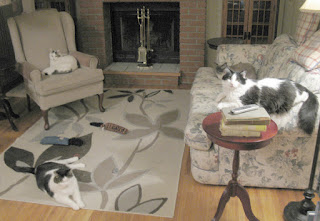