A Rare Visit of Josie to the Hospital

Josie rarely has medical problems, or at least medical problems that I know about. She doesn’t face crises, such as Tucker, nor does she feel poorly as much Cammie. My Chubs does have a sensitive stomach and regurgitates her food now and then, but in the seven years she has been with me, she has given few signs of a need to visit the veterinarian.

Now, however, I have noticed a small nodule on her face, at the rear of the right side of the jaw. It is about the size of a pea, and rather hard. It may be a harmless cyst; it does not appear to be causing the Great White any distress. She is eating well - as long as I give her flavours that she likes - and not favouring soft food over hard, so I don’t believe she is suffering difficulty in chewing. Even so, I thought it best to have her examined by a doctor. 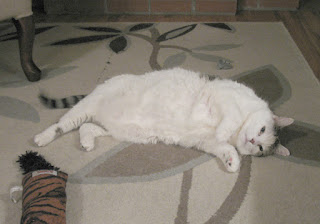 As well, Josie’s breath is starting to smell a bit and she may need a dental procedure. I will have that considered, too. Tucker’s breath is growing worse, I can mention while I am on the topic. It was when I took him in about a possible dental that his diabetes was discovered. It was thought better to stabilise his insulin dosages before any surgery was conducted. I will talk to the doctor about the possibility of scheduling that now.

Also, I will bring Cammie in to the hospital with Josie, to have her claws cut. I can hear her clicking throughout the house.

Complicating medical matters is the fact that the veterinarian I was consulting has moved. This is the second of my animals’ doctors who has left the hospital for other locations. I will be trying a new doctor on this visit, and will need to have her apprised of Tucker’s condition and history.

Now that the sale of my house is assured, I can schedule such appointments for the beasts, knowing that I will have the money to pay for them. It is a weight off my mind. Now, if the cats’ health will reflect my optimistic domestic arrangements, the year will end better than it began. 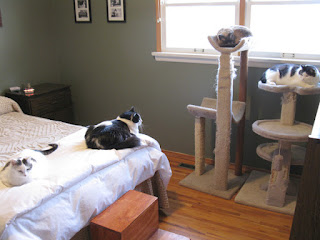