Out of the Old, Into the New

The move is over. I must still go and clean the house - I thought of hiring someone for it, but the season has apparently been very busy for the trade, and no one is available until after the house’s possession date - but other than that, I have left the old residence behind.

The move itself was accomplished as well as such moves can be. The company that did it was quick, and co-operative. The three young men kept calling me ‘sir’, which made me think that either they were very respectful or they thought I was old. I like to think they were respectful.

I won’t publish just yet any pictures showing much of the apartment. Right now, there is still a great deal of unpacking to achieve, so it looks like the warehouse at the end of Raiders of the Lost Ark. But I can show you the cats.

I kept them in a spare room of the house until everything was taken over to the new apartment, and then transported them there. They were very curious about the new place and all the boxes strewn about. Tucker and Renn slunk about ‘like Peter Lorre contemplating a crime’ (in the words of Al Stewart’s aptly-named “Year of the Cat”), but by the evening were purring as per normal. Tucker accepted his insulin dosage easily and without fuss. Cammie had been getting on the bed more often just before the move, even with other beasts already there, and seems to be continuing that trend now. The first picture below is from the old house (note the gutted chest of drawers), while the second picture is from the new apartment. 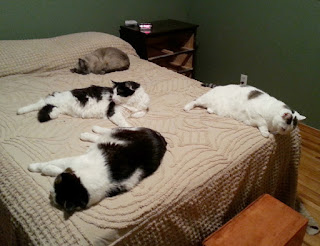 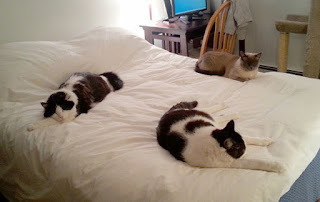 Josie, meanwhile, seemed to adjust the most swiftly, and quickly checked out what may be seen from the newly-placed tallest cat-tree. Alas, the views obtained from the new home are not as good as those in the previous, but there may still be something of interest for an observant feline. 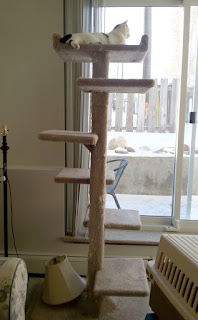 I will publish more stories today, but my internet is not yet connected, so I must use an alternate computer on which to publish. I will describe some things that I have been saving, so the following few posts look back. When the unpacking is complete in the new apartment, I will take you forward.
Posted by John Bellen at 7:18 AM