Cats are creatures of habit, perhaps to a greater extent than many others. During the move, my beasts’ world was thrown into a bit of turmoil, though not as much as I expected, thank goodness. They navigated around the boxes and coped with the loss of beds and toys. Sometimes they coped in strange ways.

The heated cat-beds had been placed on cardboard boxes. This kept them off the cold floor and provided a bit of spring. I decided to wash the beds before moving and, once they were washed and dried, did not replace them, as we would be vacating the house the next day. This did not suit Josie.

My Chubs was going to enjoy those cat-beds whether they were there or not. She lie on one box, then went to the other. She stayed for about half an hour. She’s stubborn and probably thought she could intimidate me into returning them. Alas, conditions were not in her favour. But I admire her spirit. 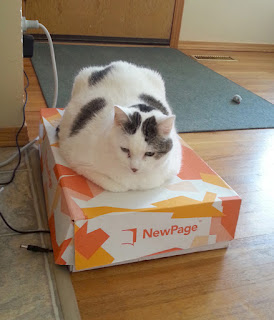 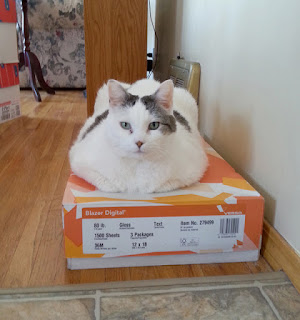