An Interesting Day at Home

I had another ‘open house’ this weekend, in my continuing attempts to sell my house. It was a different kind of open house, however. Before the event, I wanted to confirm it with the realtor, and found to my surprise that the open house is scheduled for next Sunday - he had not put the ad in the appropriate places by the deadline, though he had five days to do it. This put me in a quandary, as I had advertised on Facebook and Kijiji that the event would be this Sunday (yesterday). I figured people might show up based on that. So I called my realtor and asked if there would be a problem with me hosting the open house, if he was not scheduled to do so. He acquiesced and so I got ready to receive any visitors.

It turned out well. There were five parties, three couples and two singles. Two seemed promising. I liked that I was able to answer the questions they had about the house and the neighbourhood, and at least one of them expressed satisfaction at being able to meet the owner. It occurred to me that having the owner present might be an advantage, as he would know much more about the house than the realtor, and would give the viewing a more personal aspect.

I had designed a colour brochure about the house and was able to print off some copies to give to the viewers. As a friend of mine pointed out, there should be something that the viewers can take with them, to keep the house in their minds and differentiate it from others that they may see that same day.

But of course my real worry was over the cats. I felt that with me still present, I did not have to confine them in the spare room downstairs; I simply had to watch the doors to the outside. I need not have been concerned. Three of them spent the two hours of the open house in the bedroom. Cammie was the big surprise. This cat who frequently hurries under the kitchen sink or the bed when strangers arrive remained out and about the whole time. She watched people walk by, she sniffed their shoes, she looked out the window. She was curious about the doors when they opened, but I think that was more an attraction to the fresh air and smells coming in. I was quite proud of my princess. 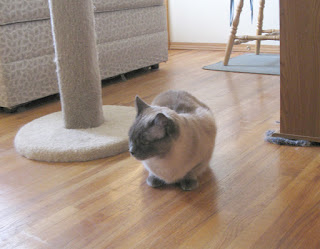 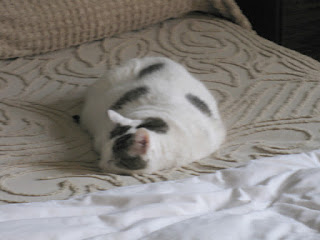 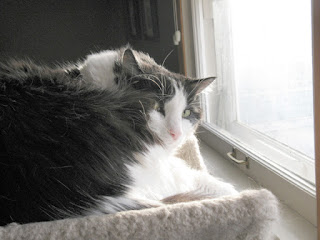 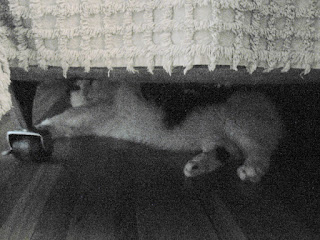 Renn stayed on the cat-tree by the bedroom window, while Josie was largely apathetic on the bed. Tucker spent the time under the bed. Strangely enough, with about fifteen minutes remaining in the open house’s schedule, all of the beasts came out and circulated in the building, as if they were sure there would be no more visitors. Nor were there.

Now, paws crossed that the day will produce some results.
Posted by John Bellen at 7:39 AM