The Princess and the Peach

With six cats, there is always something going on, and since one is blind from a stroke, and in third-stage kidney failure, two are diabetic, one is sixteen and in stage-two kidney failure, another has FIV and stomatitis, and the sixth has very stinky poop – well, no, that’s not that great a problem – that something can often be a worry.

However, I try to look on the bright side of things. For instance, Cammie threw up a little last night. It was just a bit of sputum, not including any of her earlier food; this was how her previous episode began. But it’s almost eighteen hours later, and the princess has not repeated the performance. At the least, if she did, she would have already digested plenty of food from a good breakfast – the amount she ate this morning being another factor mitigating against any real sickness. She also ate a very good late dinner, a supper, one might call it, just a few minutes ago, and is now snoozing in her heated cat-bed, after a long drink of water.

Cammie is approaching the anniversary of her stroke (May 26th) but she is, I think, living well for a blind cat. She enjoys her meals, gets attention when she asks for it and now that spring is coming, she has the scents and sounds of the outside to entertain her.

Raleigh has been feeling off for some days now. What is frustrating is that he appears to recover somewhat one day, only to relapse the next. However, as with Cammie, so with Raleigh: the Peach needs to eat so he will ingest his medicine, and he is still eating. I include his crushed pill in the first amount offered him, just hidden near the top of his food. If he doesn’t finish all his medicine-laden food, I save it and give it to him later, and later he is usually hungrier than earlier, because he did not eat much then. Once he eats, he usually relaxes in a spot and position only he can find comfortable, and snoozes.

As with Cammie, judging when Raleigh will eat, and what he will eat, is a matter of experience, and so far, I have been able to keep up with him. While these two, and the others for that matter, are a constant source of worry, I try to counter it with the realisation that, so far, they have overcome all obstacles to a good life. The cats don’t ask for much, and if I can give them a little more than that, I think they will be content. And if they are content, I will be, too. 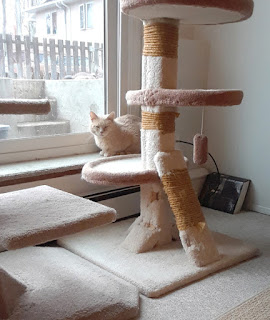 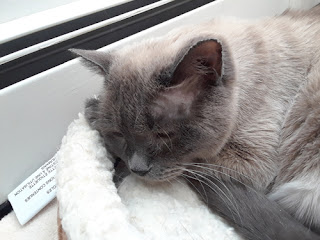