Ambivalence for the Thin Man

While Renn may be feeling the effects of his age, I worry about my foster-cat, Neville.

I have been discussing with his doctor switching kinds of insulin for the Nevsky. When the Former Thin Man came to stay with me, his diabetes went into remission. Something must have occurred to bring it back, however, and, while it has been somewhat managed since then, it could certainly be better. The doctor needs more information, though, and that means a ‘curve’. Unfortunately, his latest curve showed his insulin having very little effect, and a curve barely existed in his blood-sugar readings that day. It remains to be seen if the doctor can use this particular information.

Otherwise, Nev is doing well physically. I don’t know that he is happy living with me. He is bullied a little by Tucker, but the main problem is that Neville detests being poked by needles all the time. Tucker is resigned to receiving his insulin and having his blood drawn eight or nine times a day once a month. Neville dreads it all. His tail is never high and he doesn’t purr much.

Then again, he comes up on the bed for a snooze even when I am at the computer, next to the bed, so he doesn’t fear me, at least. He spends more of the night on the bed, too. And he has ceased to kick out when I pick him up to carry him to where he must give me blood when his curve is performed. Progress has been made with the poor fellow. But I still think he is not happy. 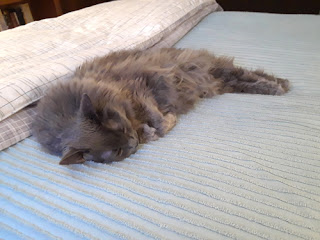