Less Roly in the Poly

Tucker, like Renn, has been with me a decade, and will be sixteen in the new year. When I look at him, especially from above, I can tell that he has slimmed down quite a bit from when I first started calling him the roly poly. But his loss of mass is not, I think, bad; it, like many other new traits in my cats, is a matter of age. 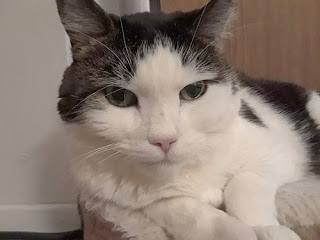 Tucker is diabetic and his condition has always been tricky to manage. But we seem to have arrived at an adequate point: his numbers are always high, and almost never reach what would be considered the target range, between four and eight. But his insulin has an effect, and his doctor, with whom I consult regularly about the numbers, is pleased with the curves that result from blood-samples. As well, Tucker is clinically looking good in regard to his diabetes.

Tucker is, in fact, my most active cat now. It’s not that he is forever running or jumping, but he moves quite a bit, and plays. And he is always at the door to greet me when I come home from work, at which time he talks a great deal, perhaps telling me how his day went.

He has a number of spots in which he likes to snooze, his favourite right now being the heated cat-bed in the sitting room, but he enjoys lying in the nylon tunnel, as well. Sleeping on a dining room chair is comfortable for him, and periodically he will occupy the hammock in the sitting room. He has recently returned to the bedroom; he stopped going in there when the former Felons were living with us because I would put him and the others in there while the kittens had the run of the rest of the apartment. Tucker disliked this; he disliked being confined to one room, and he disliked being confined with the other cats. He became surly. Now, he is returning to the bedroom, both during the day and the night, to sleep.

Tucker doesn’t eat as much as I would like. He has little for breakfast, but I will leave a good portion out in a bowl on the sitting room floor during the day. Either he or Renn (another slim eater) will usually finish it off during the day. As with all the others, I keep hoping to find that one magic food that is both good for him and which he loves. So far, the closest to that has been any human food I happen to be eating; Tucker is my companion in dining. (Though when I finish the course in which he is interested, such as roasted pork, and begin on a dessert, he leaves after I tell him ‘All done, all done,’ and spread my hands to show that they are empty.)

While my sausage-shaped cat is being ground down by age, he retains his good spirits (as long as there are no kittens about) and cheerful, if timid, demeanour. He continues to amble over to me for no other reason than to rub against me. I will pick him up and stroke his head and chin. Sometimes, we stand at the kitchen window, a view he rarely gets unless I am holding him, and look at the wind blow leaves about. He purrs and kneads my arm. There may be less roly in the poly these days, but what is there is happy and contented. 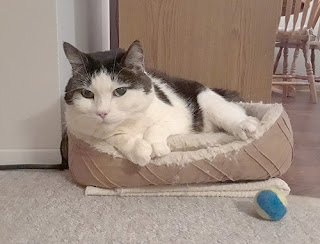