The Power of a Trusted Friend

At the beginning of the week something happened to Oleo to frighten him. I was in the kitchen washing the dishes while the kittens ran about; the other beasts were locked away in the bedroom. I heard some pounding, as if tiny fists were beating against nylon. This was followed by a cry or wail. I hurried into the sitting room but both kittens looked physically well, though Oleo seemed startled. I think he may have caught a claw in the fabric of the tunnel and had panicked when he couldn’t immediately free himself.

For the next couple of days, when the Felons were on the loose, Oleo avoided the nylon tunnel. Even when I tried to urge him inside, he refused. He was scared of it.

Then, last night, I witnessed an example of why two kittens are better than one. Oleo had been observing his brother during the week while the pair were out playing. Bisto was untroubled by the tunnel, and continually ran through and over it. Oleo started to attack the tunnel when his sibling was inside, as the two have been doing since I first released them into the apartment. Then, he went inside the tunnel again. By the end of their exercise-period, both kittens were playing in and around the terrible tunnel.

I had seen Oleo watching Bisto about the tunnel. I had seen him gradually overcome his fear and join in the games again. It was because Bisto had no anxiety about the tunnel that Oleo, within days of an unnerving experience, had put it behind him and regained his confidence. This was an excellent example of how kittens learn and grow, whether because of other kittens, or an older mentor. This was the power of a trusted friend. 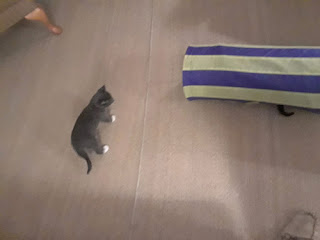 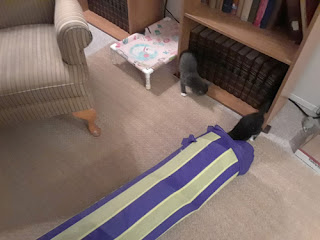 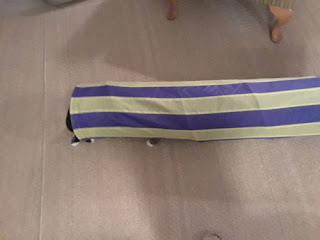