The Felons are in their new home. It is a trial-adoption but, at the risk of jinxing it, I will write that they will be staying. I find it hard to believe that anyone – short of a foster-guardian – could give them up once they are installed in one’s life.

The removal from the Cosy Apartment was almost smooth. The kittens’ new people brought a carrier for them, but Oleo and Bisto didn’t recognize the container for what it was – or perhaps they did – and it frightened them. Bisto hid and Oleo fought fiercely to keep from going in. So I put them in one of my carriers; it can be returned later. The pair had been placed in the carrier daily, to keep them out of the way while I vacuumed the library and scooped its litter-box. They were used to that confinement.

Oleo and Bisto will, I hope, soon forget me and turn to the new family as their new family. I feel wistful about their absence, but I know they will recover quickly; it is not as if they were adult cats, with adult cats’ reactions. Their new humans sound perfect for them, and the kittens will be perfect for the humans.

In the old days, British criminals convicted of serious but not murderous crimes were sometimes ‘transported for life’ – shipped to penal colonies for the duration of their days. Many were permitted to carry on trades and built better lives in their new lands. So, I think, it will be with the Felons. Transported for life, they will find their world a better and broader one, with an unlimited opportunity for fun and affection. They are just the sort of reprobates to take full advantage of it. 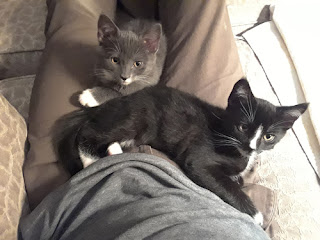