Watching the changes through which the growing Felons go is one of the delights of raising kittens, I have found. One change is in their eating habits. Not only are their preferences becoming marked - Oleo likes the hard kitten food, while Bisto will usually eat the soft first - but so are the amounts and times that they eat.

When they first came to me, the babies ate voraciously. If their dish was empty, it meant they were hungry. There was no set schedule for feeding them: I just set the food down and that was meal-time. 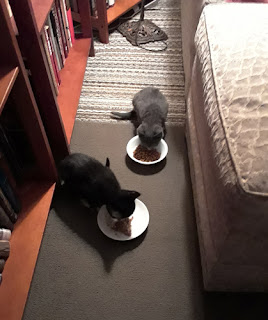 Now, they are a little more selective. The pair still eat a great deal. This is reflected in their weights, which are approaching thrice as great as the first time I weighed them. But there are numerous instances of food being left on their dishes. They eat it eventually, just not always right away. And I suspect that they are tiring of the same diet of kitten food. I do have two varieties to feed them, but I may start supplementing it with scraps left over from the permacats’ meals; nothing substantial, just a little flavouring. 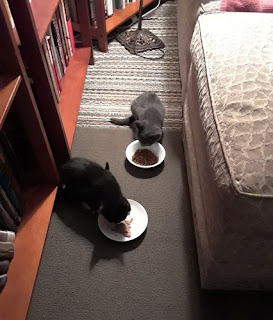 They are curious about other foods, as well, as they are curious about everything. Bisto sampled the contents of my tea-cup yesterday. There was nothing in it but semi-dried dregs, and I think it was probably the remnants of sugar that attracted him. Nonetheless, he must have thought it was tasty. 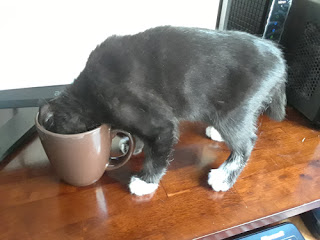 I won’t get to see them change much more, as they will be leaving on Thursday, and I hope not to see them again in person, as that would mean their return. But that is the fate of foster-cats. I was fortunate to experience what I have, to be a part of their swiftly moving growth and learning. And because of that, I too have learned. That is the fate of foster-guardians. 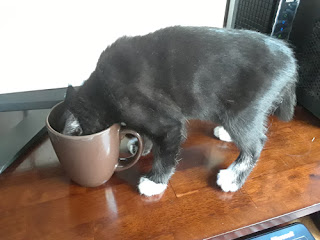