As the old year is running down, I am reminded of time, and its effects on age. That’s not an original thought in this season, but it comes as I have been observing Renn. My big boy, always so robust and fit, has been having a little difficulty in jumping up onto furniture, such as the bed and the sitting room couch. In the bedroom, he has been making use of the portable staircases which Cammie used to use, and which all but Neville use now, in various ways.

Having a couple of diabetic cats, I thought at first that Renn might be suffering from untreated diabetes. Weakness in the hind quarters is a symptom of the condition. After several attempts – his blood does not flow easily – I was able to gain a sample of his blood to read its glucose level. It was 3.7 which, though actually a tiny bit below the preferred range, is adequate, and certainly no where indicative of high blood-sugar. 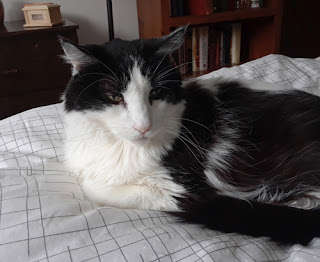 A friend suggested that Renn, who will be fourteen in 2021, is feeling the aches of arthritis. That is a possibility. In any case, I will be making an appointment for Renn at the veterinary hospital soon. I don’t believe his need is urgent, but it’s best to have him examined. It’s been a while since he was given the once-over, and it may be time. And it may be time, and age, that is catching up to my big boy. 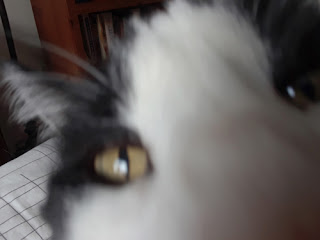