Late in 2020, I conducted Operation Raffles, a new attempt to capture unsterilized cats behind my work-place. I at last caught Bauble, the feline I had been trying to trap for two years. I caught her too late, however, to stop her from becoming pregnant once more. She was nursing kittens at the time, and I knew I would have to trap more cats in a few months.

I initially thought there were two kittens; it is now believed that Bauble had four. I had to wait until that slim time between the moment they no longer needed to be with their mother and when they would be old enough to reproduce. That time has come, and Operation Mini-Raffles has started. It has, in fact, provided its first results. 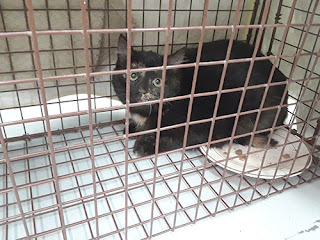 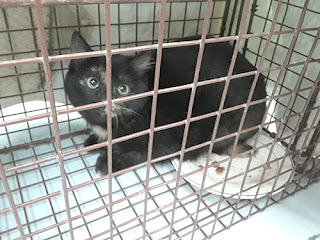 Being a tortoiseshell, she is almost certainly female. I have learned that there is no opportunity for her surgery today; she will go in tomorrow. This will mean a frightening day in a trap for her, but that cannot be helped, and she will soon recover from the ordeal. The important thing is that she is caught, and soon will be free to live her future without worry of endless motherhood.