Well, it appears that Sonata has a sister who shares her colouring. Meet Serenade, another tortoiseshell youngster. I am attempting even now to arrange a veterinary appointment for her. 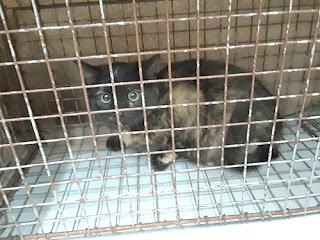 I did not think I would catch another kitten so soon after Sonata, and, while I am pleased that I have, it throws out my expectations. I was told by the man who feeds the local ferals regularly that Bauble had four kittens: one black, one tortoiseshell, one black-and-white and one white with some black. As you may note, Serenade complicates things.

I believe I have seen a black kitten. But it may have been Sonata - whose colouring is darker than Serenade’s - in low light. Or it may have have Philo, a black cat captured in the past, and still present in the colony, though he is large and less likely to be mistaken for a black youngster than is a dark tortoiseshell kitten. 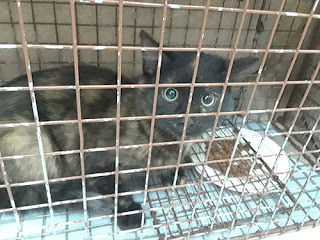 However, first things first. Spaying will be arranged for Serenade, and Sonata, who spent the night at my apartment, will be released. I literally have them coming and going. I just don’t know for how many guests to prepare.