Neville’s visit to the veterinary hospital was, I would rate, a success, though the Nevsky himself might disagree. The blood-glucose sensor was installed on his back, and he was given a little shirt to wear, so that it would stay in place, and he would have little chance of disturbing it. 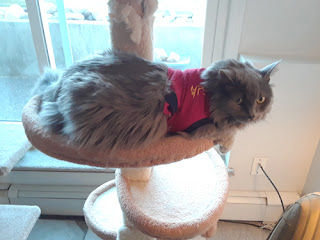 After we had come home, it was clear that Neville did not like the shirt. He did not fuss about it, or try to remove it, but he was restless, changing locations four times in as many minutes. Also, he wore a heavy expression, as if weighed down. He was not trying to get at the sensor and, furthermore, I would have to remove the shirt to give him his insulin, though I could put it back on afterward. I took off the garment and found that Nev seemed bothered by the sensor not at all. As of writing, it has been six hours since our return to the Cosy Apartment, and he seems not even to notice the device. The shirt has remained off. 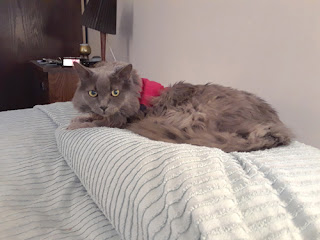 This success is complemented by the working of the sensor and monitor. I could not confirm at the veterinary hospital that the monitor, which I was able to borrow from another member of the PAW Society rescue group, would be compatible with the sensor; I suspected that there would be no difficulty, but I wanted to make sure, as I didn’t wish to wait until Monday to have any problem corrected. It turns out that the sensor had to adjust to Neville’s body temperature for an hour before it would start transmitting. I took the monitor’s compatibility on faith, then, and was rewarded when it gave me a reading sixty or so minutes later, at home. 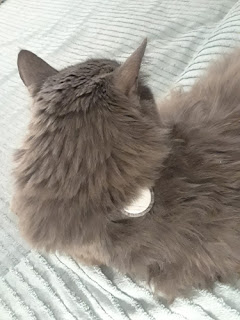 Neville’s blood-sugar numbers are far too high but that is immaterial to the working of the sensor and monitor. His numbers, whether good or bad, are what we need to read to devise a better programme to treat his diabetes. Nonetheless, I can see a curve form much more clearly, and with many more readings along its descent and ascent, than I could with the standard method, poking the poor cat’s ears every two hours. This easy reading will continue for as long as the sensor remains attached to Neville’s skin, which, it is hoped, will be about two weeks. That will give us a wealth of information with which to work.

And it will give the Former Thin Man a much needed respite from blood-letting. 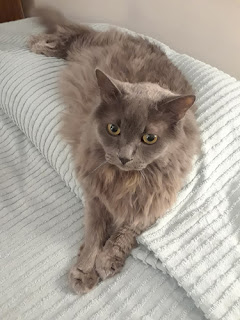