We of the Middle Ages

I mentioned in my blog on Wednesday that Neville was going to the veterinary ‘tomorrow’; that is, Thursday. I was incorrect. He is going on Friday; Renn had the appointment today. I was lucky I sorted it out before I took the wrong cat to the wrong doctor on the wrong day, or any permutation thereof.

Neville will still be having the blood-glucose sensor implanted tomorrow, but today was about my big boy. I had decided to take him for an appointment because I noticed that he was having trouble jumping up onto furniture. He was using the stairs to ascend to the bed, and would sometimes struggle to leap up to the couch. He also had not been for a general examination for a couple of years.

It turns out that Renn has arthritis. He has suffered some loss of muscle mass in his hind quarters. I have some tablets to give him that the doctor says should help; the tablets are more like treats than medicine, and my big boy eats them readily enough. When they run out (they are, of course, expensive), I will resort to the joint-medicine that I had given Josie for a time, and see how Renn takes it.

He has also been coughing a great deal, as if trying to bring up a hairball. None ever comes out, however, and the doctor theorised that this could be the beginnings of asthma. I am to watch for my cat having to work to breath after such episodes.

Last but not least expensive is Renn’s need for a dental. He has some bad gingivitis. This will be seen to in the next couple of weeks.

Blood and urine samples were taken for a full set of tests; I likely will not have the results until Monday, though I don’t expect anything bad to be revealed. Even so, I think the examinations are a wise precaution, and, as he will be having dental work soon, the tests would need to be performed anyway.

After the appointment, during which my big boy behaved very well, his tail almost up while in the examination room, he came home, had a good meal and a rapidly-paced play session. He is now snoozing the evening away on my bed. We have passed our days and nights together now for ten years; I’ve felt new aches and pains just as he has; I’ve found it harder to get up in the mornings, as I know he has. He doesn’t seem even middle-aged to me. Perhaps he is kind enough to think the same of me. 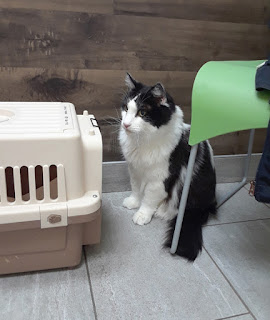