It is always interesting watching cats as they dream. I know that not all of their dreams are good ones. I recall Tungsten periodically waking herself by crying out. Often when she woke from dreaming, she would call to me; I would come to where she was, and she would start purring.

Neville, on the other hand, had a dream this morning, in which he seemed to be chastising someone. Lying on the bed, he started saying something. To me – and bear in mind that I am not multilingual, either in human or feline speech – it sounded as if he repeated the same phrase three times; the inflection throughout was the same, even at the conclusion, to which he gave a curious little ‘curl’ to the sound. This was followed by a different sentence.

Then he woke up. He may have been embarrassed that he was caught speaking while asleep, for he purred and flexed his paws. I couldn’t help laughing at him, but he took my amusement well.

Not usually so vocal, the Nevsky normally restricts his speech to meal times, when he can’t help commenting in his gravelly tones about the approaching food bowl. Sometimes, he will remark upon the meal as he’s eating it. This was the first time I’d heard him talk in his sleep. I wish I knew what sights and sounds he had experienced on the other side of wakefulness. They appeared to be entertaining, whatever they were. 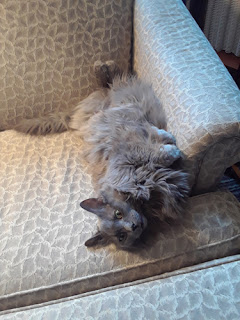