Neville will be experiencing a change in his diabetic treatment, beginning today.

With the help of the new electronic blood-glucose sensor and monitor, a very detailed chart of his blood-sugar numbers over more than a week was devised. What it illustrated was that his current insulin is not controlling his diabetes at all. The reaction of the Nevsky’s diabetes to ProZinc insulin varies from drastic to negligible. It is not in any way consistent, sometimes throwing his numbers down to single digits, sometimes having almost no effect at all. This situation is frustrating, especially since when he arrived at my apartment, he needed no insulin; he had gone into remission. Then, when he did require it, it worked well. He is not insulin-resistant, as sometimes happens, as it does have an effect on him, just not a consistent one.

Nev’s veterinary agreed that it was time to try another insulin. This is glargine, a human insulin (ProZinc was made specifically for cats.) It is the same kind that Tucker uses. For the roly poly, it has proven effective, though not spectacular. It has kept his numbers consistent, if not as low as I would like. However, its results have been satisfactory in his case.

In Neville’s instance, there may be an unknown factor, beyond diabetes, affecting his blood-sugar. His blood and urine were examined not too long ago, and though there were a few abnormalities, there was nothing startling or worrying, and nothing that would distort a diabetic reaction.

The amount of new insulin Neville will be given is conservative, just two units twice a day, so its effects may not be great. But this will be early days for the new treatment. The veterinary wants a curve after just a weekend of glargine being used. Unfortunately, the electronic sensor has a life-span of only two weeks, and Nev’s is about to die. I will probably have another placed for later study, but when they remain too long on a cat, they can lead to skin irritation and infection. Neville will therefore have to suffer the old-fashioned curve this time.

My poor foster-cat has had to put up with a great deal. I hope that this is the start of an easier treatment for him, and better days in general. 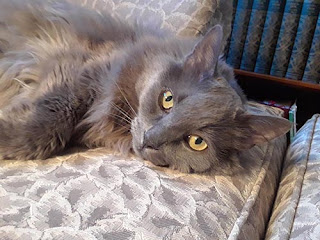