No Joke for Scherzo

By a remarkable amount of luck, I have managed to trap the third of Bauble’s five kittens at my work-place. While Xanadu waits, more or less happily, at home, this little one waits, terrified, in a trap. I’ve named him Scherzo; it’s a classical music term for a light, amusing movement, from the Italian word for ‘joke’. Right now, however, Scherzo isn't seeing any humour. 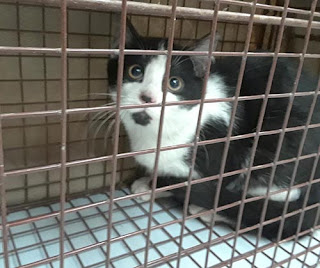 I didn’t think I’d catch him, or as easily as he was caught. This morning, I set a trap while five or six of the regular cats, all previously fixed, came out for breakfast. I didn’t see any of Bauble’s kittens at the time (though Sonata and Serenade were seen on the weekend, cleaning themselves after eating.) Not ten minutes later, one of my co-workers came in and reported a cat in the trap. I was certain it was one I had previously captured.

Two black and white cats (Fresca and Shasta), brothers, are regular diners behind my work-place; they are nearly identical, but I can tell them apart upon inspection. Scherzo looks like them, but the nearly all-black nose and black smudge on the chin differentiate him. That he is an unsterilised youngster was confirmed by my colleague who feeds the colony.

I am waiting now upon the availability of a time for Scherzo’s surgery. Though I am, for convenience, calling him male, he may be a female, and the longer time required for spaying must be considered by the doctor. Either way, he will be staying over-night in the warmth of my bathroom. I think I feel confident enough in Xanadu to move him to the library this afternoon.

This seems like a good start to the day, even if Scherzo isn’t feeling it. 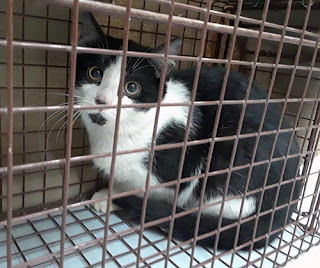