When Arliss, the white and orange outsider mancat, first started coming to Café Cosy, I thought he might be acquainted with Sable, who had been visiting the food-bowls for a long time already. He often appeared soon after she had, sometimes sitting in the background while she ate. I fancied that they might actually be friends.

It seems that this is the case. Last night, Sable and Arliss came to see what was on offer. Initially, when I saw them, she was in the concrete ditch, and he was on the parapet behind her. At one point, she ran up the steps and either touched faces with him or smelled him. In any case, it was an act of familiarity, and Arliss didn’t move. If not friends, they are at least friendly. 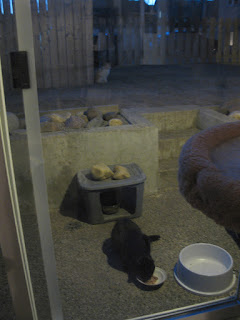 When I opened the glass door to put food out, Arliss ran back to the corner of the fence and watched as I set the food down and Sable ate. Sable had seconds but didn’t eat them all. Arliss then came forward, finished off her late supper and had some hard-food. They left separately, but only because I opened the doors again to put out more food: Arliss was afraid of my proximity, and Sable was done eating. 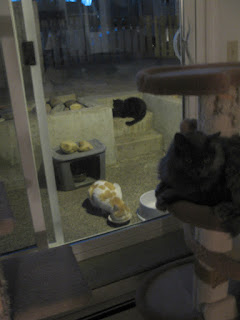 I wonder now how they came to know each other. Sable’s sister, Sablette, vanished more than a year ago. It was, in fact, almost exactly a year ago that Sable reappeared, after she and her sibling had been absent for months. Whatever happened to Sablette had left Sable alone. I like to think that she has now found a new chum, someone to keep her company – and whom she can keep company – on bright days and in dark nights. It may have been Sable who led Arliss to Café Cosy. In any case, I will have to set a table for two, from time to time.