Neville can suffer from some terrible mats. His fur is long and, despite combining in locks, is individually fine. He dislikes being brushed or combed, so I fall behind on taking care of the mats. I tried picking them out with the tines of a comb, and I tried using a seam-ripper on them. Both methods tugged and pulled the Nevsky this way and that, causing him some discomfort and even more annoyance. 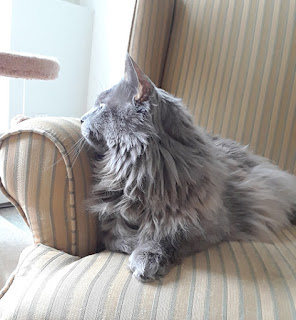 Then, I saw on Tim’s Tomcat Commentary that Rumpy, who is also prone to matting, is periodically given a trim in certain places by his dad. I don’t think Rumpy likes it much, but it is over quickly and effectively. I have electric trimmers myself, so I thought I would use them on Nev.

This plan worked well. Neville didn’t care for having to lie still through it, but it was much less of a bother than other methods of dealing with his mats, and he wasn’t startled or frightened by the clippers. I was able to rid his fur of the worst clogs, and will be dealing with the smaller ones, as well. 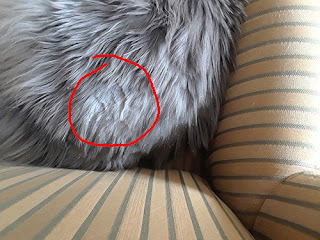 Neville doesn’t look pretty after a bit of trimming (and yes, he has a bit of dandruff, due to his diabetes), but it worries him less than any other way, and doesn’t cost anything, unlike taking him to a groomer or a vet. And I think if he had to choose, he would plump for treatment at home. After all, that comes with a few treats as a reward. Thanks, Timmy and Rumpy.