Portia On the Other Hand...

Lest anyone think that life with my new foster-cat, Portia, is all about inconvenience, bewilderment, frustration and anxiety, I should remind them that that is life with ALL cats.

Portia has actually made great strides in her behaviour. She and I spend at least one period a day together, which is not easy when I work most hours of the day and have chores most of the rest - and three other cats to give time to. But she looks forward to our time, I think, hurrying in to the library ahead of me so she will be ready to lie on my lap when I sit down. She sometimes stays there for half an hour, purring, while I pet and brush her. When she ceases purring, it doesn’t mean our time is over. That’s when I stop petting her and she usually stretches out for a few more minutes. I let her determine how much time we spend together. 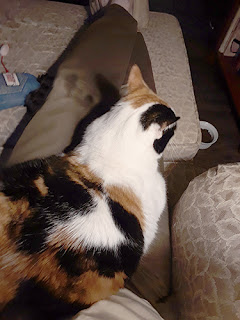 She is also doing better with the other cats. They avoid her, but that reflects more the memory of her past behaviour than it does the current situation. She does still swipe at them, and even run at them, but these instances are rarer than they were. And, as always, if the victims of her actions would just stand their ground or, in the case of Renn, just ignore her, things would improve pretty much over-night. 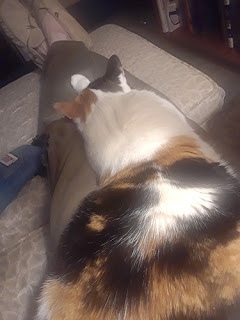 She used to hiss at me quite frequently, whenever I did something of which she disapproved. That too is less common now, though she will open her mouth as though to hiss - but no sound will issue. It looks like she is breathing with her mouth open, but she is not. It’s almost as if she is threatening to hiss at me which, I don’t intend to explain to her, does not convey the same impression.

She plays, with me and by herself. The other day, she played in and out of the nylon tunnel and attempted to do what many cats have accomplished: slip in through one of the holes in the top. She is not quite as lithe as Xanadu was, or even Renn. She became stuck. 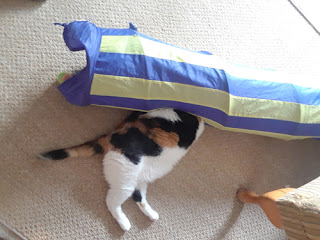