A Burst of Neville

After describing in yesterday’s entry how Portia likes to play, I thought I would offer evidence that my other foster-cat, Neville, is not the laziest cat I’ve ever had living with me, though much of the time it would seem like he is.

While the Nevsky will play with a string-toy now and then, it always seems to be a grudging action, more from annoyance with my attempts to involve him than from delight in playing. Now and then, however, he experiences a burst of energy that is startling in its appearance and exuberance.

It will come from nowhere. He will be sitting, staring, as if in thought. I will speak to him and, with a grunting ‘errr’, he will turn and shoot off toward another room. Once there, he will often pause, then rush off in the other direction. If he runs into the sitting room, he will more frequently than not bounce off an armchair on to a cat-tree. His enthusiasm is greater than his aim at times and he will throw himself chest first into the side of a platform. This doesn’t slow him down, however, and he will arrange himself on one level or another and wait for events.

Sometimes, those events include me coming up to him, at which point Nev will twist himself about, watching me from an angle. I may approach him from under the platform, making him grunt and turn about to view me better. But then I pop up from the other side, resulting in the same response.

This weekend, the game lasted longer than usual, and included my boy whapping my near by hand with his paw (claws in). This was repeated numerous times until, at last, he was tired from turning this way and that, guessing where I would materialize next. He attacked a fuzzy mouse or two that I tossed at him, but his energy was finally spent, and he subsided onto the carpeted platform, purring. A minute or two of head-rubbing and the game was done.

I’m not sure why these episodes come over him, and can never predict their advent. But Neville undoubtedly enjoys them and, rare though they may be, if he finds pleasure in them, so do I. 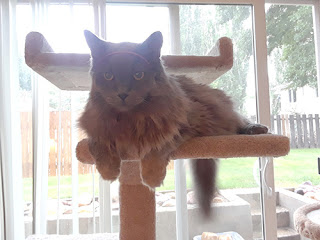