I don’t recall if I wrote it in a blog entry or just talked about it with a friend, but a while ago, maybe in early June, I described Portia as being unhappy. She was displeased at having lost her home, being placed in this strange environment, having to live with other cats, and with an unknown human – a man, at that. I think she was angry much of the time. 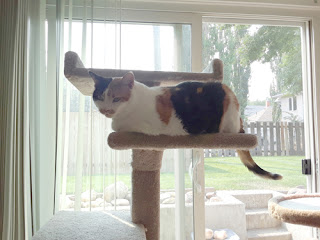 This was to be expected. Certainly the confusion and distress of being wrenched from a home of many years would afflict any cat brought into a completely different setting. Being a very sensitive and intelligent calico may have affected Portia more than it would otherwise.

But I believe things have changed for her. Po has adapted to her new home. She has found favourite spots, and she has developed a routine that fits within the general routine of the Cosy Apartment. She no longer hisses at the other cats. Neville and Tucker walk past her without much concern, though sometimes the latter hesitates for a moment. Renn is still quite wary of her because he took her lunges and hisses more personally than did the other two boys; that, however, is his problem rather than hers, and he is dealing with it. 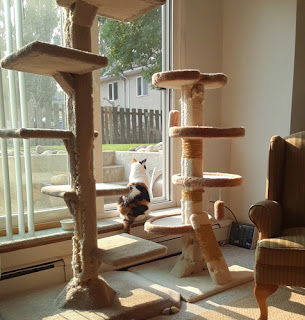 Portia’s new attitude is also shown in how she is using her small world. After ignoring the cat-trees since her arrival, she has begun using them on her own (subsequent to some prompting by me.) I have found her several times this weekend on the taller cat-tree in the sitting room; she seems to prefer the middle-level platform, and likes using it as a vantage point to peer out the glass doors. 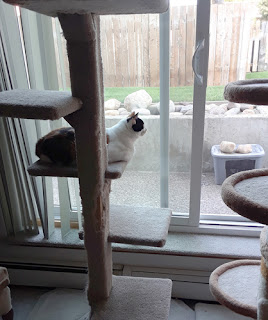 She likes to lie under the cat-tree, in the full blaze of the sun on hot, late afternoons. She dozes there amid a jumble of toys with which she plays periodically. She retreats under my bed less often, though it may just be a quiet, cool spot for her now, rather than a refuge from discouragement. 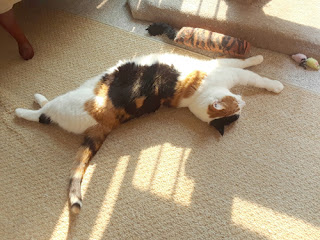 It is in her behaviour toward me that I see changes, too. She likes our time together, usually in the evenings, when, seeing me go into the library for my own reasons, she will follow me and expect me to provide her with a lap. Sometimes I will do the inviting. Other times, she will be lying on top of the short bookcase, under the window, and refuse my invitation to join me on the couch. I can sense a difference in her refusal: instead of a low grumble or a hiss, my offer will be met with a slight pause of consideration, before it is declined. (“Not just yet. Maybe later.”)

And she let me cut her claws on Saturday. She wasn’t happy about the process, and I couldn’t achieve all of them at once, but it was done, and she didn’t hold it against me. 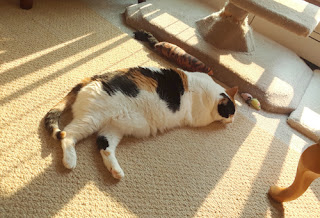 Po undoubtedly misses much of her old home, and will continue to do so. But I think she has made the decision to live in the Cosy Apartment. She doesn’t look to the front door whenever she hears voices in the corridor; I believe she no longer expects her former humans to show up and take her home. She has, I think, resigned herself to the apartment being her home.

And she has, perhaps, found a little contentment in that realisation.