Most weekends are good because I don’t have to work. Some, however, are better than others. Saturdays themselves are the better half of weekends, and while all Saturdays are enjoyable, some are more so, for different reasons. This past Saturday was a very good one.

It rained all day. It has been very dry here, and we need moisture, even though it is quite late in the agricultural season. The smoke that has hung beneath the clouds due to the forest fires in other regions has been washed away; I had nowhere pressing to go, so I spent most of the day indoors, grateful for the fresh scents and cooler temperatures that came with the rain.

But something less meteorological made the day a good one. Each of the beasts I live with contributed its share. Tucker and I spend much time together. He tends to stay in the same room as I, sitting at the dining table, hoping for a bit of human food, then following me into the sitting room or bedroom. We play and talk. He ate a very good amount of food, and was a happy fellow. 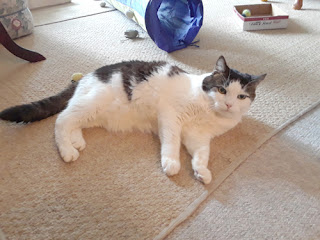 Portia saw me enter the library during the afternoon and hurried after me, leaping up on the ottoman there. She wanted to lie on my lap. So I sat down and was pinned in place for about twenty-five minutes, while Po purred in reaction to being petted and brushed. I had things to do, but this was better. 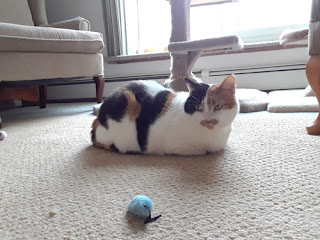 I had to shave more mats from Neville’s fur. He dislikes it but puts up with it. He hates being gathered up and taken to the bathroom, and he hates the detailed attention I give his hair. I cut off all the mats I could find and let him go. An hour later, I sat on the couch for a few minutes; the Nevsky got up from his cat-bed and jumped up on the couch and settled on my lap, which he hasn’t done in weeks. I rubbed his face, his cheeks and his chin; he purred and drooled. We sat there so long – more than half an hour – that I missed the beginning of my usual Saturday evening radio programme. But I didn't mind. 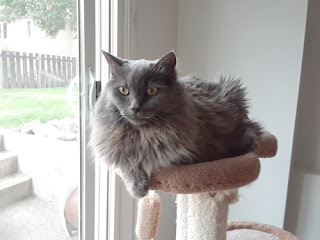 Come bath-time – a greater pleasure in itself this weekend as the temperature made a hot bath enjoyable, as opposed to the merely adequate warm baths taken during torid weather – and Renn came to wait with me while the tub filled. His forefeet curled into little fists as he lie on the bathmat and listened to me discourse about various things. My big boy loves bath-time, and I draw the bath much more slowly than I could otherwise, to give us time together. 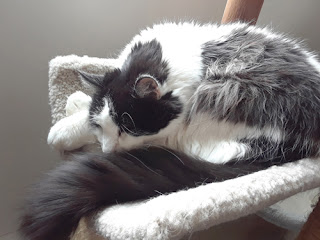 The movie afterward was entertaining, which added to the evening. But I had company. First Renn curled up beside me for an hour. When he left during the intermission, his place was taken by Portia, who lie on my lap for the remainder of the show. Afterward, there was time enough for a snack for the beasts, and so to bed.

This was my good Saturday. It doesn’t take much these days to make a good day. Four cats usually suffice.