I have sometimes contemplated why cats like to lie on human laps. Not all cats do, of course, but a startling proportion of them do. There are a number of obvious reasons why the location is chosen, such as the warmth generated by the human body. But, by and large, whatever the lap has, I would think a cat can find elsewhere, and to greater advantage.

Consider the physical aspect of where the cat lies on a human lap. Every human is shaped differently, and, since every cat is, as well - at least to cats - there seems to be an unlikely chance that cat will fit human perfectly. The feline physique, being, seemingly, boneless, can adapt itself to a variety of shapes and contours. Yet I cannot convince myself that these are more comfortable than not. A plain cushion or carpeted floor would appear to be a more attractive horizontality.

Not every human has a sufficiency of padding, to make a cat’s tenure upon the lap easy. Some people have too little, and are boney. Some have too much and take up the cat’s space. Some have it in the wrong places. Again, then, there must be more appealing locations for the average cat, such as one of the many beds with which most cat-households are equipped.

Heat is a probable benefit to lying on a lap. Yet, once more, nature or artifice would surely provide better than a human. A heated cat-bed gives just the right temperature to the feline temperament, while a sun-puddle, having warmed the right spot on the floor, has an allure most cats cannot resist. 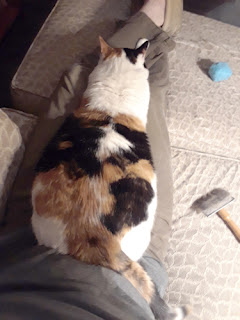 What is it, then, that a human lap has that nothing else possesses? I am forced to conclude that it is the human himself. There can be no better way for a cat to show his affection for his person, while simultaneously relaxing, snoozing or sleeping, as best he can. It is the closeness of the two, human and feline; the ability of the human to feel the cat’s purr, and the cat to receive pets and strokes; the unstated comradeship that is thus manifested. I believe that this is the secret of the lap; this is why cats choose an angular or misshapen lap, inclined the wrong way; two fat parallel bars, with an inconvenient crevice between; knees that protrude and thighs that don’t provide enough foundation. They belong to the cat’s human, and by snuggling there, as only a cat can, the beast tells the person that to be with him, the beast would endure discomfort and inconvenience, forgoing the many better stations of ease he could find.

Between cats and humans, then, the lap is the seat of friendship. 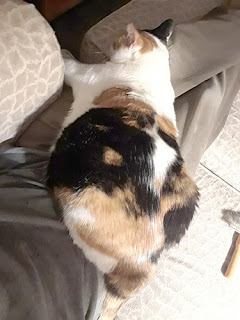