Hector’s first night in the Cosy Apartment was surprisingly quiet. He had been a noisy fellow during the time he had to wait at my work-place prior to going to the doctor but, then, he was in a carrier the whole time. He spent the night in my bathroom, as he will until he proves himself with the litter-box. He is off to a good start, using the box within a few minutes to wet. 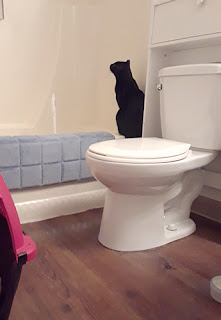 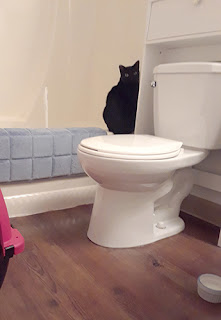 I don’t foresee much delay in moving him to the library; I suspect he knows fully well what a litter-box is for. In fact, he was undoubtedly a house-cat at one time. He is wary, of course, but not really shy. He had a home at one time, and is, at least, superficially, in good shape. Hs fur is smooth and clean. He will receive a more detailed medical examination at some point in the near future. 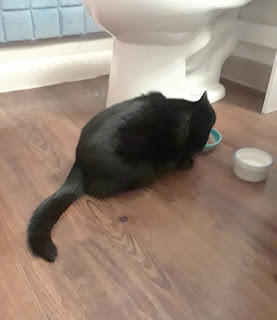 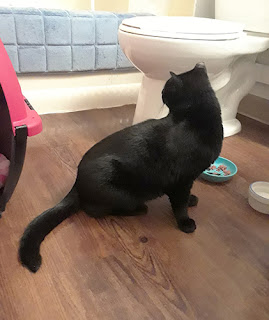 As may be seen, he remembers what a lap is for. He spent about ten minutes on mine, being petted and talked to. He explored the bathroom and, during the night, opened the cupboards under the basin and threw out some bottles. I had to wrap a tight rubber-band around the knobs of the two cupboard doors to keep him from getting in again. He wasn’t interested in breakfast, but did eat last evening, and his behaviour suggested that he wasn’t ill, just a little ill-at-ease, which is understandable. I left him some food and water for the day. I’d like him to eat, of course, but also to be a little hungry come dinner-time. 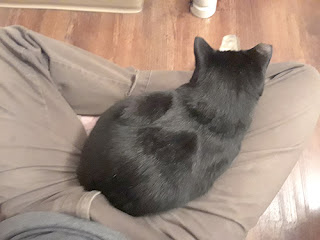 As is usually the case, my two oldsters, Renn and Tucker, were quite uninterested in the newcomer. Portia and Neville, however, waited outside the bathroom door to meet him. Po in particular is eager to make Hec’s acquaintance, though what the results will be when they meet is still an open question. 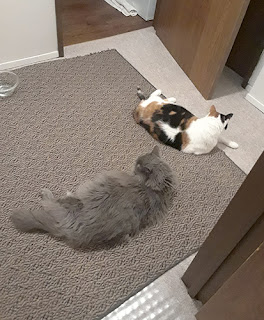 I have a feeling that Hector’s integration will be soon. I can’t predict whether it will be a good or easy one, but he doesn’t seem to need isolation. He was someone’s pet, I am certain, and I just need further confirmation that he is satisfied with our cat-litter before releasing him, under supervision and with restrictions at first, of course. I think Hector is looking forward to his release with anticipation. 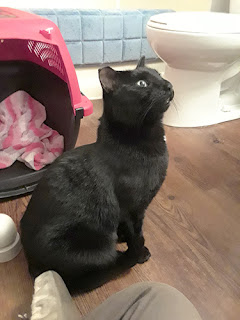