The Stranger in the Strange Land

Hector Fortescue (as I seem to think his full name should be) is slowly adjusting to life in the Cosy Apartment. He is at the stage at which I leave the library door open all the time when I am home and awake. Sometimes, he hides behind a corner bookcase; sometimes, he lies on the short bookcase to look out the window, and sometimes he explores the apartment. 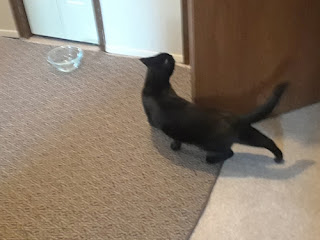 His interaction with the other beasts is still embryonic, though it is interesting to see that he seems to have more of a problem with them than they do with him, which is probably the preferable of the two options. As someone pointed out, my lot are used to new cats coming and going, and even Portia went through her period of meeting new felines; being introduced to others is an old act to her now. Last night, while I watched my movie, I saw Hector wander out of the library. A few minutes later, there was a burst of growling and he hurried back into the room. I went out to the sitting room and saw Portia and Neville lying there. I’m certain they had not moved; Hec had encountered them, growled to prevent anything untoward happening (which looked not to be likely, anyway) and hastened back to his safe-zone. 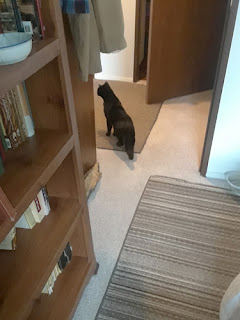 What’s interesting about the situation is Portia’s reaction. After a couple of days of demanding entrance to the closed library, she doesn’t appear anxious to spend time there now that she can. She has been in, sniffed about and left again. I think, and hope, that it has less to do with the new cat than with Po finding that she rather likes other parts of the apartment. She has been into the bedroom more often in the last few days than usual and, something that particularly pleases me, she has spent time purring on my lap on the sitting room couch, as she has done innumerable times in the library. 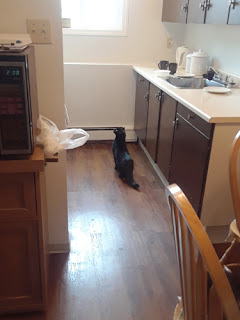 Neville, too, has been in the library since Hector’s arrival, but since he goes there simply to eat what food may be lying about there, to drink water and to leave a deposit in the litter-box, he is not much affected by Hec’s presence. Even so, seeing another cat nonchalantly come in to the library, do what harmless deed he wants and leave, is, I believe, beneficial for Hector. Tucker almost never visits the library, and Renn was in briefly for movie-night. (Tucker's reaction to seeing Hec for the first time froze him in this position for more than two minutes...) 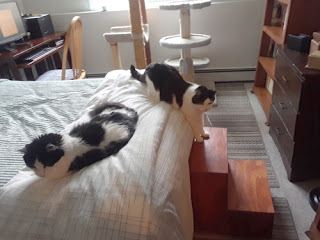 I have no qualms about Hector’s relationship with other cats. It will evolve with time and patience. And he will be fine with people, too, I have no doubt. His stay with me will comprise, then, in terms of learning, finding out his likes and dislikes, his idiosyncrasies and peculiarities. Such is the benefit of the foster-home system. 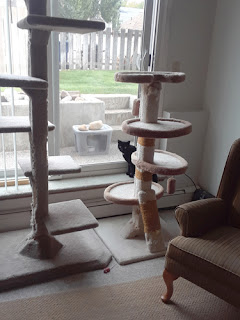 Oh, and he and I were both relieved last night: he crapped for the first time since his arrival. There wasn’t a lot, considering it was four and a half days in the making, but he has been consuming mostly soft-food – of that, what isn’t water must compress quite compactly – and the anaesthetic and vaccines he received probably threw off his metabolism for a bit. But I was becoming worried, and would have dosed him with laxative tonight, if he hadn’t gone. His body is relaxing and returning to its routine. Once his mind does the same, I predict that Hector Fortescue will be a happy little fellow.