Tucker continues to be a puzzle when it comes to his diabetes. I have been giving him two units of insulin only once a day, in the evenings, in response to his blood-glucose numbers being moderately high (in the teens) at one point (either mornings or evenings) and low (single digits, not counting the fractions) twelve hours after or before. This past weekend, I performed a ‘curve’ on the roly poly, which told me his numbers throughout the day. The results surprised me.

The time was when Tucker would start the day (and finish it) with numbers in the low twenties. This Saturday, he started at 14.5. I could have given him one unit of insulin with such a number, but I wanted to see where two would take him. I was confident that it would not prove dangerous for him. His numbers started declining right away. In more stable times, his nadir would be reached early, about mid-morning, after which the values would start climbing again. That was what, for a long time, I considered normal for the Tuxter.

Saturday, his numbers fell, and kept falling. By evening, he was was 3.4. I’d never come across a cat whose blood-sugars fell throughout the day in response to one dose in the morning. Thirteen hours later, they were still decreasing, albeit slowly. Typically, they would rise again after reaching their lowest peak roughly six hours after injection. I am sure Tucker’s numbers rose again, but they had not begun by the time I stopped poking him for blood at seven o’clock p.m.

I felt vindicated in giving my boy only one dose daily (I usually do that in the evening, so I am better positioned to monitor any reaction), but two units would appear to be too much now. I am currently giving him one unit a day, and am awaiting word from his doctor about the latest ‘curve’.

Tucker’s behaviour has been healthy and normal throughout the vicissitudes of his diabetic wobbles, so I am not too concerned about this latest development. I am more concerned with my treatment of it. ‘Better too high than too low’ is a bit of a motto when treating diabetic cats’ blood-glucose numbers. Even Tucker’s starting value on Saturday (14.5) has not been considered bad by either myself or the veterinary; not bad for Tucker, at least. Two units is now too much, I believe; if things continue as they have been, one may be too much, as well.

But for the present, I will stabilise the sausage’s insulin at one unit each evening. He appears content and healthy with that dose, and those are good characteristics for a sixteen year old diabetic cat with no teeth and failing kidneys to have. 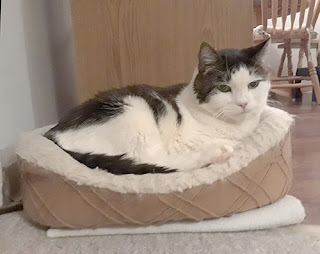