Our Creature of the Night

Sunday night, I decided that Hector could move on to the next stage of his integration, which would consist of leaving the library open at night. Its door had been open during the day, but giving him access to the apartment while I was asleep was the appropriate sequel. He had spent most of the day in the library, in spite of being allowed to roam. I thought he would do the same at night. I was wrong.

I know this because Hector makes long, wailing, siren-like sounds, as if facing off against another cat. I, fearing a feline confrontation, jumped out of bed to put a stop to events. I found the perma-cats lying, a little puzzled, in their usual places - a couple were on the bed with me - wondering why the new boy was making weird noises. Hector also growls, probably at smells. He banged at cupboard doors. At one point, he was seemingly trapped at the top of the tall cat-tree in the sitting room, Portia at the bottom, watching him. After I returned to bed, I could hear Hector in the bedroom; Po was evidently no deterrent to his movement. 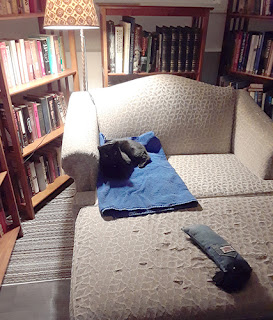 After two hours of sleeplessness - mine and Hector’s - I put the furry black one back in the library and shut the door. He fell silent and, probably, asleep.

Last night was better. Hector still wandered, but didn’t make as much noise. I still felt constrained to return him to the library after an hour and a half. Part of the improvement was due, I think, to the heating pad I placed on the library couch. Unlike Portia, when she was in the library, Hec took to the warmth right away, and spent much of the evening on the towel covering the pad. The days and nights are still balmy enough to leave windows open a little for fresh air, but the rooms can be a bit cool after dark, so extra warmth is, I think, welcome.

Hector is doing well adjusting to his new world. He purred for me last night and has no qualms about exposing his belly or otherwise showing his trust. He has also started playing. Life will be quite different for him from now on but, I hope, better than his old one. 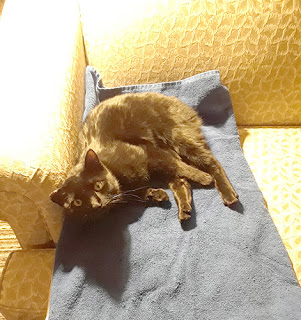