Well, it’s been a while since I’ve spent a great load of money at the veterinary hospital, so it’s time I took one of the beasts. Consulting the rota, I see that it’s time for Tucker to have a problem. 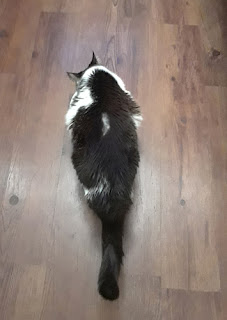 Though he is doing well, the Tuxter has a bald patch on his back. It may be due to licking but I don’t think so, as it is probably the only spot on his body that the roly poly cannot reach. I have not seen him licking that spot, which I think I would have, at least once, if he had been intent on it enough to scrape the hair away. Nor does the region in question appear raw, as if licked by a cat’s tongue. And it isn’t bare: there is hair remaining, as though most has fallen out, but not all. 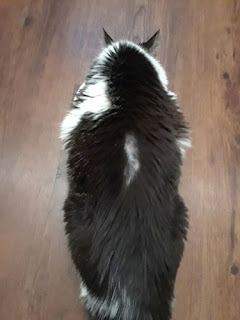 Tucker has a history of a thin spot of hair in the same location, so much so that I said to him that his bald spot had returned, when I saw it this time. However, this one is longer than any previous, and it came on rather rapidly. It is concentrated along his spine, as well, which I find strange. 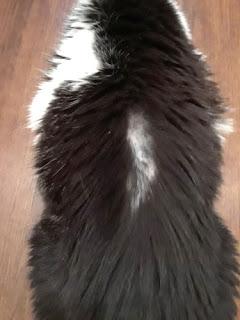 All of these add up to a doctor’s appointment, this Friday morning. As his years add up, and with his other issues, Tucker isn’t in a position to take chances with his health; he could use a medical once-over anyway. I’m sure my boy would disagree, and say that it is simply age; many lose their hair as they grow older. He would tell me that he’s just taking after his dad…