Tucker went to the hospital yesterday, principally to have the doctor examine the bald patch on the boy’s back. The results were the proverbial good news, bad news. 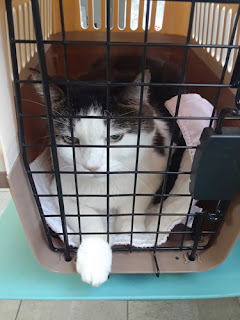 The good news is that Tucker’s kidney problems have eased considerably. According to his previous blood-tests, back in March, his renal numbers were high. On Friday, they were discovered to have dropped by a third. The veterinarian said that she “rarely sees” such a reduction, and was very pleased with it. It may have been that the earlier numbers were the outcome of conditions prevailing that day – a fluke, in other words. That would mean that his usual numbers are lower. The current numbers, conversely, could be due to the treatment Tucker is receiving, the kidney-powder and the subcutaneous fluids. In either case, the tidings were glad, and we were pleased to receive them.

The bad news is not as bad as the good news is good. The bald spot may be due to a number of causes, such as parasites (unlikely, since the roly poly never goes outside, except to visit the doctor) or allergies (and to what he may be allergic is anyone’s guess.) The doctor thinks, though, that the Tuxter’s bare patch is probably due to him licking it in discomfort or pain. Though I have seen no evidence of this – either in Tucker’s behaviour or in witnessing his licking the spot – it does look as if it were caused by a cat’s agitated tongue. The veterinary believes it may be proof of pancreatitis. This would account for Tucker’s erratic blood-sugar numbers (which were uniformly high this week, instead of low, as they were recently.)

The solution that we are trying is Cerenia. This will hopefully reduce the discomfort being felt. I am giving Tucker a quarter pill of Cerenia once a day for four days. He is difficult to put a pill into and, ironically, the fraction of the pill is tougher to get down his throat than the whole, since it is harder to control going in. I follow it with some food-and-water in a syringe (something Tuck must receive anyway, as it contains his kidney-powder) and yet, like a magician’s sleight of hand, he still manages to produce the quarter-pill in an attempt to eject it.

If the Cerenia doesn’t work, the next step is to try Buprenorphine. I expressed my concerns about this, citing its effect on Renn, when he received it after a dental surgery. The doctor told me that the dosage would be considerably reduced in Tucker’s case, though I don’t know if a smaller amount would then have efficacy. Steroids are a possibility, too, but the veterinary does not want to use them because of their adverse effect on kidneys.

While Tucker possibly has yet another enemy to confront – pancreatitis – I am confident. My boy has successfully fought most of his health-foes; those he has not, have been held at bay in superb rear-guard actions. I know that his kidney problems will return, likely stronger than ever. But for now, they have been dealt a severe blow by his lower numbers; they will not soon forget their repulse this day. And, as may be seen, a counter-attack has already been organised against the latest opponent.

In the meantime, the roly poly remains a happy fellow, the purringest cat I know, optimistic and ready to tackle all comers. 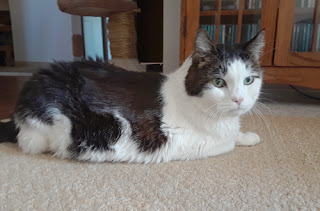