Hector Goes to the Doctor

Hector went to the veterinary hospital yesterday. This was to give him his booster vaccinations, micro-chip and de-worming (his first had not been complete), and for a general check-up. Everything went well, and the boy is in good condition.

His complaints were continual and loud in the journey over to the hospital, though, as may be seen from the photographs, his youngster’s curiosity could not be restrained. A couple of times, he resorted to climbing on my lap for re-assurance; the only time he’s sat on my lap since his first day. He cooperated with the staff, though he took exception, not to the various needles, but to having his claws cut. 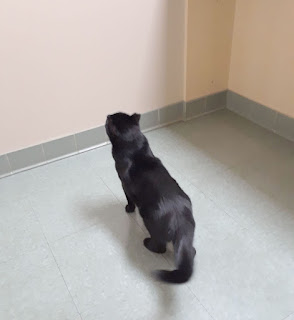 The boy was estimated to be a little older than we thought - between one and two years - but his health is very good, other than a little tartar on his back teeth. I worried that the tip of his right fang, which is broken off, might have exposed a nerve, thus causing his ravenous attitude toward soft-food, and his lacklustre desire for hard (perhaps it was painful to crunch the hard-food, and he was hungry all the time) but the doctor didn’t think there was any problem, and that the merest tip of the tooth had been lost. Hec is hungry just because he is hungry. 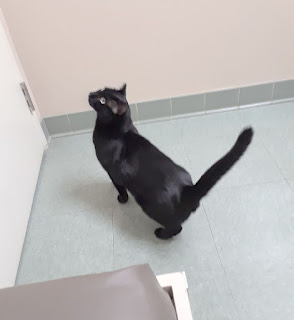 I think Hec was glad to return to the Cosy Apartment, where he was awarded an extra ration of food for his troubles. He seemed unfazed by his ordeal. His night was ordinary - a mixture of frantic action and relaxed snoozing - and the last thing I saw of him this morning was his proud transport of a fuzzy mouse into the library, his prize dangling by its tail from his mouth. 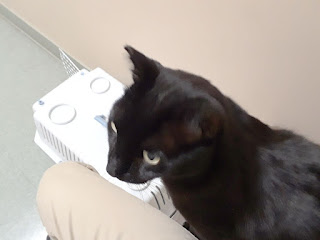