I’ve mentioned before, I think, that Hector is my easiest integration. He still runs after the other cats but, since his purpose seems to be to try to entice them to play, he is doing so with decreasing enthusiasm: he is realizing that, for the most part, he’s not going to find a playmate in the Cosy Apartment. When he is fired up and playing by himself, he will sometimes pounce on one of the others, but this rare. Usually, it is a matter of running up to one of them and tapping them with a paw. The reactions to this range from Portia taking exception to it and responding with whaps, to Tucker ignoring it.

Neville continues to be Hec’s perceived best bet for a playmate, and the boy still chases the Nevsky from time to time. But the fact that it is in good fun (on Hector’s part) and not resented (on Neville’s part) may be seen in the accompanying photograph. I don’t know who was first on the bed and who jumped up second, but in any case, the original occupant didn’t move.

Either my oldsters are becoming more tolerant in their increasing age (which seems unlikely) or they simply don’t mind the newcomer. 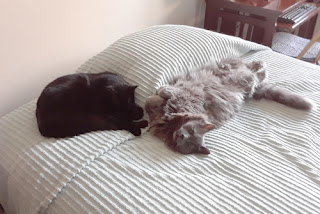