The Return of a Friend

It has been a tough time for some of the cat-people I know. Three cat-blogs I follow have each had to bear a heavy loss in the last week or so, and, closer to home, friends have lost two foster-cats. Such events are always sorrowful, and not much can alleviate the painful feelings that they cause.

But good news may be had, even in tough times, and I have some to share. Those who have been reading this blog for a while may recall the outsider-cats who have come to eat at the food-bowl I provide for them, the Café Cosy. Some may remember the all-black Sable, who used to come to the café with her more timid sister, Sablette. I see that, according to past blogs, I started feeding them more than three years ago. Sablette sadly stopped accompanying her sister by the spring of 2020.

Sable would cease to come to the food bowl for extended periods. I note that I wrote of her return in March of last year, after not having seen her for a long time. This year, she stopped coming in late April, or early May. For some reason, I thought, after a long time, that something had happened to her, and she would not return. But this week, she did.

At ten-thirty, on a week-night, I saw a black cat huddled on the steps down to my ditch. I immediately thought of Sable; she used to wait there for food. It was difficult to tell for certain, in the light afforded by a dim outside bulb, and because short-haired black cats all seem to resemble each other. But this one wanted food, and I hurried to prepare a dish of Fancy Feast.

Almost as soon as I placed the food on the concrete floor of the ditch, the cat came to eat it. That was exactly what Sable had done; she was wary enough not to approach too soon, but trusted me a little, so she would want to eat even before I had closed the sliding door once more. And then I saw her right ear, the rim of which was lined with silver, probably from an old frost-bite. It was Sable.

Her condition seemed to me to be a little rougher than previous, as though she’d had some trouble keeping the excellent care she had priorly kept of her coat, or had aged rather more than she should have since I had last seen her. She ate a tin and a half of Fancy Feast, before hurrying away again, in the same direction she would always go after her visits.

She hasn’t been back for a few days, but I will check each night. The hard-food is always out for any visitor, as is fresh water, now in a heated bowl, due to the dropping nocturnal temperatures. Sable will always have a table reserved at Café Cosy. I hope she uses her open invitation again soon. 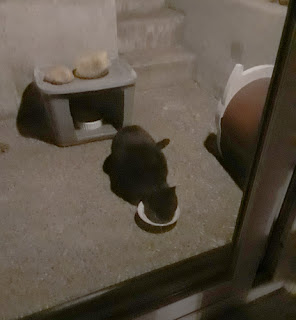